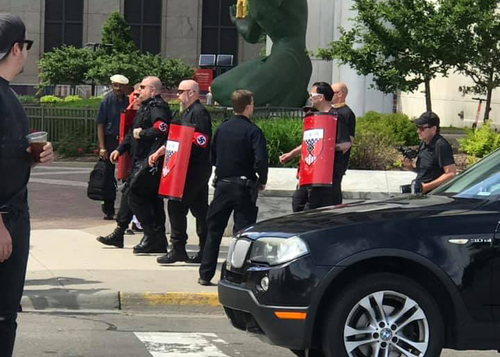 "Credible intellegence" suggests a group of neo-Nazis who marched through the Motor City Pride event were aiming to spark a "Charlottesville No. 2," Detroit Police Chief James Craig said Monday.

Tensions flared during the weekend event when the group of about a dozen, clad in swastika armbands and openly carrying guns, came in close range of a similarly sized group of counterprotesters, Craig said, according to The Detroit News. He credited officers with diffusing the sitiuation, though they've been blasted by some for "protecting" the Nazis.

The paper quotes the chief:

"They wanted something even more substantive than Charlottesville. We knew we wanted to be properly staffed, and we were.

"The one group was armed. We didn't want the opposing group to assault them and respond in a way that would be violent."

"Both groups were taunting our officers with racial epithets," Craig said, adding there were about 15 Nazis and "15-20" counter-protesters who were "masked-up and referring to our African American officers inappropriately."

Antifa, which is known for its willingness to resort to violence to thwart white supremacy, has a notoriously strained relationship with police. The group has not been known to make racist statements.

On Tuesday, Detroit activist Meeko Williams, who was involved in the protest, told city council there were "no racial epithets" hurled at police by counterprotesters. He said the protesters told police "you're black, they’ll kill you too."