Fresh details surface about a months-long criminal investigation of Macomb County's elected prosecutor and his handling of seized assets. 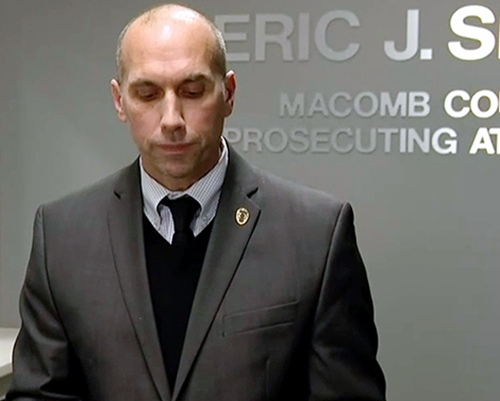 Eric Smith has little to smile about.
(Photo from WDIV video)

We've been trying for weeks to find out what Michigan State Police obtained in two raids. . . . A Judge ruled [Monday] morning that those return tabulations of evidence taken and search warrants that were given to Smith are public documents. . . .

The documents show state police are investigating four off-book bank accounts dating back to 2011 that held close to $2 million in crime forfeiture funds that were controlled only by . . . Smith.

Search warrants show detectives who searched his Mt. Clemens office in April and Macomb Township home in May wanted "any and all records and documents . . . related to the crime of embezzlement."