Detroit security officers and the union some of them are pushing to join made a splash in news coverage, on social media and at a rally outside Chrysler House downtown Thursday.

They generated online support from three Democtratic presidential hopefuls, but apparently had relatively minor impact at office buildings owned and managed by Bedrock Detroit, which contracts with the guards' employer. 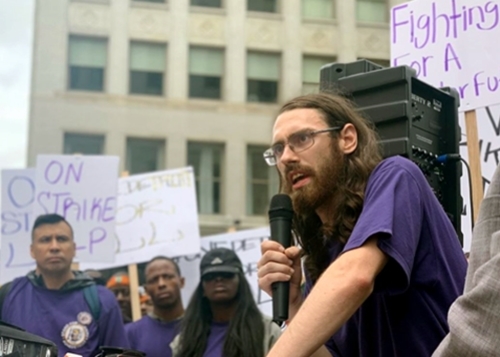 The one-day walkout, coordinated by the Service Employees International Union (SEIU) as an unfair labor practices protest, "drew loud support from the streets, but little participation from the security workers," according to Detroit Free Press coverage by JC Reindl and Emma Keith.

Most security guards stayed on the job and worked their regular shifts, according to their employer, Atlanta-based SecurAmerica, which is the primary security contractor in downtown for businessman Dan Gilbert's Bedrock real estate firm.

SecurAmerica says it employs 340 security guards for nearly 100 downtown Detroit properties, and only 16 of them skipped work to join the strike Thursday. An additional five guards who weren't scheduled to work gave the company strike notices, according to a spokesman. . . .

Guards at several Bedrock buildings said that they and most of their colleagues came to work and didn't take part in the strike.

SEIU, which says the workers earn $11 to $13 an hour, is trying to organize them into a bargaining unit to seek at least $15 an hour.

Protesting guards were joined at their rally by unionized janitors with SEIU Local 1, who last July won a three-year contract with $15 per-hour wages negotiated with several janitorial companies, the Freep reports.

At the One Woodward Avenue building Thursday, a working security guard told the paper that she and many colleagues see the jobs as temporary because they're in their 20s and taking college classes for different careers.

For politicians, the walkout in a historic base of organized labor and the role of a major union with nearly 1.9 million members, was an irresistable opportuniuty. So a trio of Democrats with eyes on the White House show solidarity on Twitter:

All working people have a right to form a union in a fast and fair process. I am proud to support downtown Detroit security officers, who are committed to doing whatever it takes to win union rights and at least $15 an hour. #OneDetroit https://t.co/BHqcY8DnCD

It's a shame that the people who are often first in line to protect their city are not offered protection of their own in the form of fair wages & workers' rights. I am proud to support downtown Detroit security officers in their fight for union rights. #OneDetroit #FightFor15 https://t.co/JoNyUixm5H

Detroit security officers have a right to form a union. I stand with them. #OneDetroit #StandforSecurity pic.twitter.com/g4Pc08QmT7

At its site, SEIU Local 1 makes a case for professionalizing and organizing this category of workers:

Security officers should be rewarded in line with their significant responsibility for public safety. To protect our cities, building owners and security contractors need to take responsibility for investing in and professionalizing private security forces.