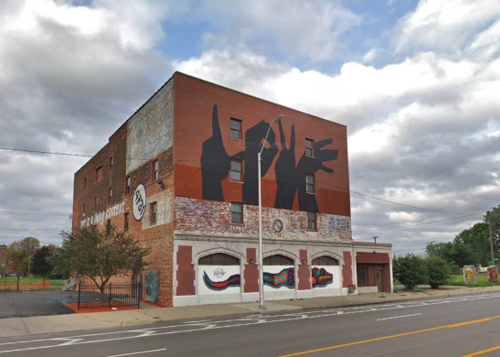 But the latest eviction, chronicled by Bridge Magazine, comes with an ironic twist: Artists in cheap studios at 4731 Grand River Ave. — headquarters for the Grand River Creative Corridor (GRCC) — were forced out by Allied Media Projects, a nonprofit with an anti-gentrification mission. Allied Media bought the building for $1 million to serve as its HQ after its rent went up fourfold in Midtown. It reportedly "agonized" over the evictions, but says keeping for-profit artists in the building would have jeopardized its tax status.

In another, less surprising, layer of irony: the GRCC is part of the reason the area is even desirable. It painted murals on derelict buildings along the main thoroughfare in 2012 to activate a stretch from downtown to Core City.

Heating and cooling systems needed work. The elevator was unreliable.

Property records show the building went into tax foreclosure in 2013, and the owners took out two mortgages for $375,000. Property taxes increased from $4,000 to $5,500 from 2012 to 2017, records show, and were set to jump this year after a reassessment, said Weaver, who became a partner in the building after the foreclosure.

The city’s new stormwater drainage fee, which charges buildings based on the size of their roofs and parking lots, slapped an $800 monthly charge to the building, Weaver said.

“It was becoming more and more difficult to keep rent affordable,” Weaver said.

Throughout the report, artists complain of no longer being able to afford Detroit rents.