In Their Words: Why These 4 House Democrats and Justin Amash Want an Impeachment Inquiry

They boldly go where nine Michigan colleagues have not gone, these four Democrats and one Republican in our state's U.S. House delegation.

While others remain on the sidelines of public talk about Judiciary Committee hearings to discuss presidential impeachment, Reps. Brenda Lawrence, Andy Levin, Dan Kildee, Rashida Tlaib and Republican Justin Amash add their voices to a small chorus that grows gradually. 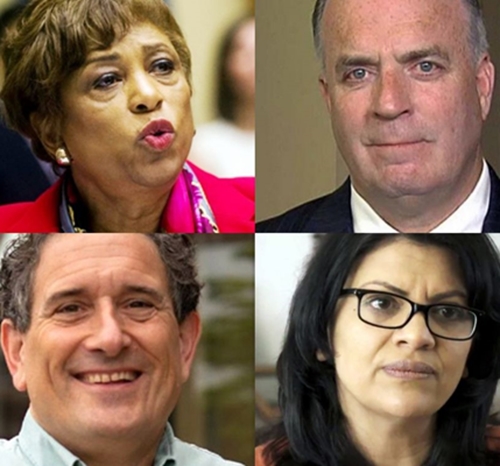 Amash, still the lone member of his party to use the I-word, and Tlaib, a Demcrat from Southwest Detroit, spoke up before others. The Detroit first-termer did so memorably shortly after being sworn in Jan. 3, vowing to backers at a bar that she'd push to "impeach the motherfucker."

Kildee, Lawrence and Levin did so more recently and less colorfully. Lawrence came on board Tuesday, three days after Levin did so at a Berkley town hall.

Now that 35 percent of Michigan's House delegation supports at least preliminary steps to consider impeaching President Trump, here's a look in alphabetical order at what each says in statements, public remarks and tweets:

President Trump has engaged in impeachable conduct. -- May 18 tweet

To me, the conduct [documented by special counsel Robert Mueller] was obviously impeachable, so the question is, do you then move forward with impeachment proceedings?

I am concerned that we've gotten to the point that impeachment may never be used under any circumstance, and I think that is a greater risk than a risk that it will be used too often.

I think it's really important that we do our job as a Congress, that we not allow misconduct to go undeterred, that we not just say someone can violate the public trust and that there are no consequences to it. -- May 28 town hall in Grand Rapids

I swear an oath to support and defend the Constitution, not an oath to do the bidding of one man or one political party. We have a constitutional republic to uphold liberty and the Rule of Law, not a direct democracy to serve some at the expense of others.

I take my oath of office, including my oath to defend the U.S. Constitution, very seriously. I have been reluctant to use the tool of impeachment, and have always viewed impeachment as a tool of last resort. But the president's actions have taken us to a moment where I believe Congress must open an impeachment inquiry to defend the rule of law. 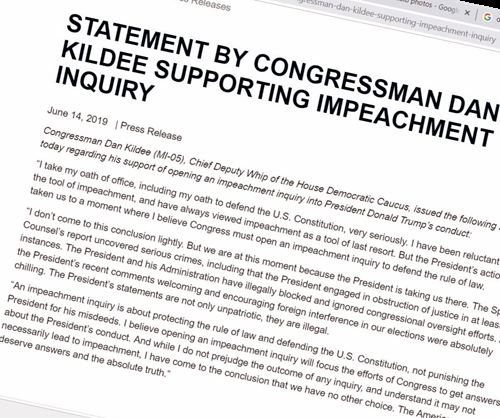 I don't come to this conclusion lightly. But we are at this moment because the President is taking us there. The Special Counsel’s report uncovered serious crimes, including that the President engaged in obstruction of justice in at least 10 instances. The President and his Administration have illegally blocked and ignored congressional oversight efforts. And the President’s recent comments welcoming and encouraging foreign interference in our elections were absolutely chilling. The President’s statements are not only unpatriotic, they are illegal.

An impeachment inquiry is about protecting the rule of law and defending the U.S. Constitution, not punishing the President for his misdeeds. I believe opening an impeachment inquiry will focus the efforts of Congress to get answers about the President’s conduct. And while I do not prejudge the outcome of any inquiry, and understand it may not necessarily lead to impeachment, I have come to the conclusion that we have no other choice. The American people deserve answers and the absolute truth. -- June 14 statement

I have been very reluctant to use the tool of impeachment, and have always viewed it as a tool of last resort.

But I've come to the conclusion that the President’s actions have brought us to a moment where Congress must open an impeachment inquiry to defend the rule of law.

[Potential obstruction of justice], coupled with his recent admission during a network interview that he sees nothing wrong with accepting assistance from a foreign entity, leaves me no choice but to now request that this body proceed with the process of conducting an impeachment inquiry.

This administration has made every attempt to prevent this Congress from performing its constitutional duties of official oversight.

The Trump administration is challenging the power of a co-equal branch of the U.S. government, the Congress. An impeachment inquiry would allow us to obtain access to the documentation and perform the oversight required to fulfill our constitutional duties. No one, not even this president, is above the law. -- June 18 statement

The only way to get to the bottom of Mr. Trump’s activities and inform the public about what we learn is to centralize and expedite the process through one select committee with the focus, power and urgency that come with an impeachment inquiry. -- June 15 town hall in Berkley

“Doing nothing when we are seeing blatant disregard of the United States constitution, to our ethical norms, is dangerous.”

It’s not only up to Congress to hold Trump accountable, it’s our job to do so. #InvestigateNow #TimetoImpeach pic.twitter.com/0h9Bh8Dnxj

Can we now start the impeachment inquiry? [The president] continues to blatantly disregard our Constitution, anti-corrupt rules/ethics and is pretty much a crooked CEO in the Oval Office. -- June 6 tweet