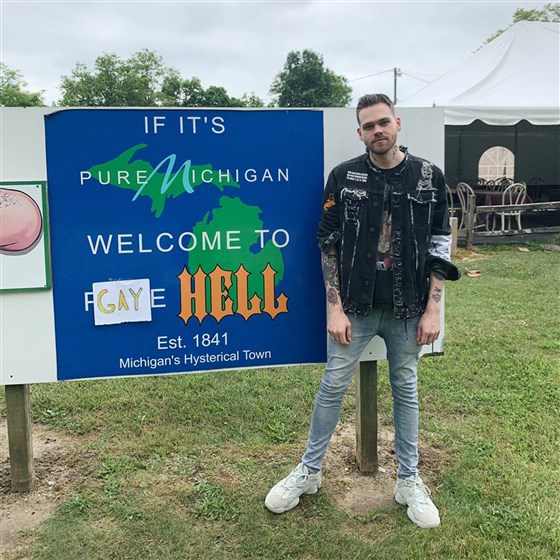 YouTuber Elijah Daniel, a California comedian and musican, who has more than 500,000 YouTube followers, has purchased the five-acre, unincorporated community of Hell Michigan, 15 miles northwest of Ann Arbor, and changed the name to Gay Hell, NBC News reports.

Daniel, 25, said Tuesday he made the move to protest the Trump administration's recent rejection of requests from U.S. embassies to fly the rainbow flag, a symbol of gay pride, during June in celebration of LGBTQ Pride Month.

The unincoprated town has about 70 residents.

"Ahead of pride month Trump's administration put a ban on embassy's flying pride flags," Daniel tweeted. "So as of today, I am now the owner of Hell, Michigan. I bought the whole town. And my first act as owner, I have renamed my town to Gay Hell, MI. The only flags allowed to fly are pride."

Daniel told NBC News in a phone interview Monday that his flag rule is intended as a joke and there will not be a ban on other flags.

"I have a young audience who is 16 to 24 who would not be involved in politics if it wasn’t in a funny or meme way," Daniel said. "I'm just trying to have fun and get my audience politically active."

Daniel declined to disclose how much it cost to purchase Gay Hell from its previous owner, John Colone. He said he will be the temporary owner, NBC reports. The town is a five-acre commercial property and was on the market for $900,000 in 2016, according to the Detroit Free Press.