The city will make it simpler for cops to distinguish between spray paint taggers and sanctioned muralists, though you'd think the different work products would be a tipoff.

After an embarrassing mix-up chronicled below, here's the low-tech fix, reported by James David Dickson of The Detroit News:

The city will begin authorizing permits in the form of lanyards, and will give the artists sandwich boards that can be posted at their work sites, said Brad Dick, group executive for services and infrastructure. . . . The lanyards and boards will be handed out by the end of the week, Dick said.

The artist known as Sheefy McFly, a muralist and musician, was arrested by Detroit police Friday while working on a piece of street art near 7 Mile and John R on the east side -- a piece commissioned by the city itself. 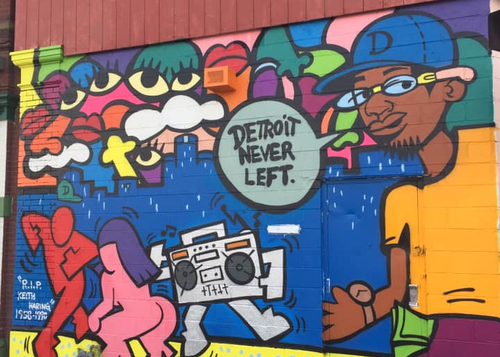 Police apparently believed McFly was vandalizing the viaduct he was painting. McFly wasn't carrying the city-issued permit to paint the space. And the situation deteriorated from there.

As McFly tried to explain the situation to the police, he said more officers arrived with “four or five police cars” on site. And even as a city official showed up to vouch for the artist and spoke with a DPD supervisor, McFly said the situation escalated.

Detroit Police Department spokesperson Sgt. Nicole Kirkwood said the officers found him to be uncooperative with their investigation.

The disagreement led to McFly being arrested on suspicion of resisting and obstructing, as well as for a warrant that was previously issued for an old parking ticket, said Kirkwood.

McFly's murals are rendered in bright colors. A recent piece features a nod to the late Keith Haring.

Social media lit up with the news. McFly posted a series of tweets, including this one:

I felt that pressure of becoming Trayvon Martin. They put me in jail to bully me. They would’ve beat me or even shot me if they had a opportunity. Never thought I’d feel this. I stay out the way and do my work. I’m just an Artist....

Brad Dick, the city's group executive of infrastructure and overseer of the City Walls program that McFly was working under, blamed the arrest on "miscommunication" between the city and police.