City of Contrasts: This Week's PGA Event Is a Fresh Symbol of 'Two Detroits' Disparity

This framing was inevitable as the PGA tour comes to northwest Detroit. Louis Aguilar goes there in The Detroit News:

Professional golf tournaments attract some of the whitest and wealthiest spectators of any major sporting event. This week, the inaugural Rocket Mortgage Classic tees off in Detroit, the least-white and least-wealthy major U.S. city. . . .

Fans will see two contrasting Detroits around the Rocket Mortgage Classic: The well-kept historic homes of Palmer Woods, the University District and Green Acres, neighborhoods that have shown remarkable resiliency. And some not-so-resilient neighborhoods south of Eight Mile. 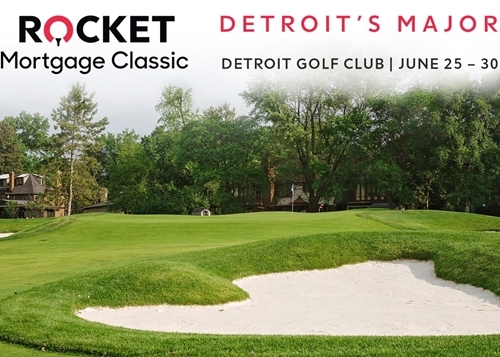 The reporter poses a rhetorical question with no answer: "Where shall these two sides meet?"

Neighborhoods around the club off Woodward, between 7 Mile and McNichols, have been spruced up by Quicken Loans, sponsor of the five-day event starting Tuesday with practices, as well as by city and state crews. They "went to the old Detroit playbook of cleaning up trash on streets and doing what they could to put the best face on empty buildings," Aguilar writes.

More than 400 employees from [Dan] Gilbert's companies volunteered to clean up trash near the former Michigan State Fairgrounds between Interstate 75 and Woodward, and on Seven Mile between I-75 and Woodward.  Several artists were commissioned to paint murals on empty buildings.

The city and state also coordinated clean-ups on nearby McNichols Road and other major streets.

A firm called Groundswell Design Group painted at least a dozen buildings on Seven Mile, many of which appear empty, according to city officials.

As for where vistors and Detroiters not at the golf course might coalesce, the paper notes that "attendees of the PGA event will receive listings of nearby businesses."