Can't lie, folks -- what you're about to read strains the boundaries of the sort of hard-hitting journalism we do here at Deadline, but when you open a press release with "ancient mummy linens" in the headline, you kinda gotta pass it along. 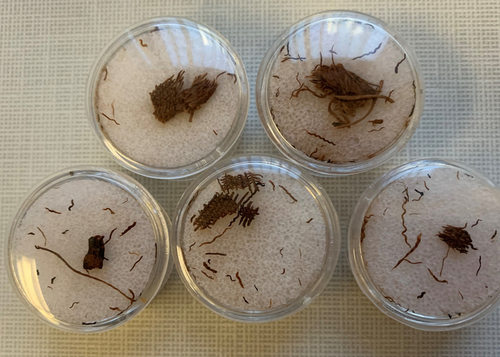 And here are the ancient mummy linens in question. Kinda anticlimactic. (Photo: Customs and Border Protection)

The release is from U.S. Customs and Border Protection, and here's the good stuff:

On May 25th, CBP Officers identified a shipment on a Canadian mail truck that was selected for an enforcement examination at the Centralized Examination Station in Marysville, MI. An inspection of a selected package revealed five jars of ancient Egyptian mummy linen. CBP began to coordinate with a Washington, DC based archeological organization in determining the admissibility of the presumed antiquities.

The seized artifacts are believed to be from the Ptolemaic Dynasty 305-30 BC and the importer was unable to prove that the artifacts were removed from Egypt prior to April 2016, which is in violation of the Convention on Cultural Property Implementation Act.

The Ptolemaic Dynasty! Those linens might have been woven in a shop passed by Julius Caesar. Unfortunately, as you can see from the photo, they're basically just little scraps of brown cloth in petri dishes. Kinda not so dramatic.

This has been your reminder that time gets everyone, even ancient mummy linens.