Beats Over Monroe: Delmar Detroit Brings Another DJ Deck to Greektown This Weekend

Architectural illustration of the newcomer's design. Another angle is below the article. (Image: Delmar Detroit)

Greektown summer nights get even livelier this weekend as a third rooftop dance club launches at the gateway corner of Monroe Avenue and Beaubien Street.

Delmar Detroit opens at 10 p.m. Friday and Saturday with two DJs each night and a $20 entry cost. Weekends will be its only nights for now (except for a July 3 party), though the owners are working on a regular-hours downstairs restaurant called Friend & Associate, Annalise Frank writes at Crain's Detroit Business. 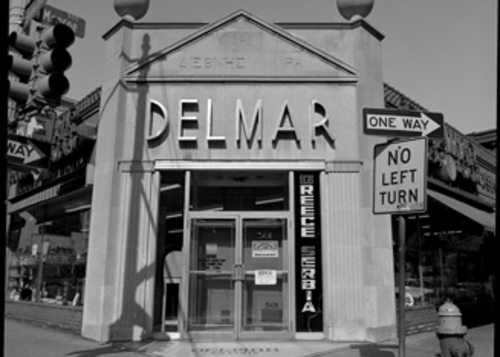 Back way before Greektown had gambling and glitz, this food and souvenir shop was at 501 Monroe St. (Photo: Detroit Public Library)

The prime location at 501 Monroe St. for decades was a Greek bakery and food shop named Delmar (right), long before the People Mover rumbled overhead and gambling was among the street's lures. More recently, it had been Santorini Estiatorio restaurant, run by the Greek American family that own Pegasus Taverna down the block.

The new owners are Christopher Johnson, who also runs The Meeting House restaurant in Rochester, and Anthony Mancini of Hamlin Corner and Pronto bar in Royal Oak, according to Crain's.

"Delmar can fit around 250, with some seated and some standing," reports Frank, who notes that two other spots -- Exodos Rooftop Lounge and Level Two Rooftop & Bar -- pull clubbers to the street at downtown's eastern edge.

The newcomer beats its drum in a style that fits the flashy-splashy niche. "Delmar is going to change the way you nightlife with unrivaled city views, 17 large VIP sections and the baddest staff and entertainment in the city," it brags unhumbly on Facebook.

The pre-opening rush includes a freshly painted deck mural by 0uizi, a Detroit artist whose real name is Louise Chen Jones. The club Thursday afternoon posts a social media photo of her posing by "phase one" of the trippy floral design in pink, purple, orange, yellow and green. It may look even brighter after a round or three of Grey Goose. 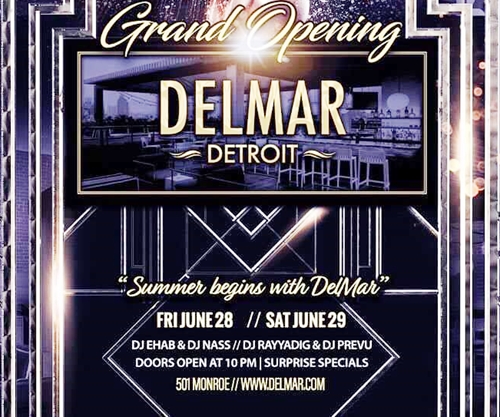 When to check it out 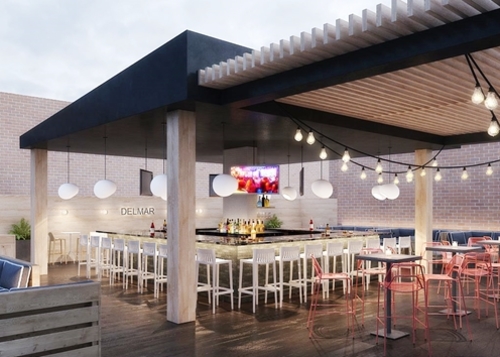 The open-air club has room for about 250 people, though not all seated. (Illustration: Delmar Detroit)