Shri Thanedar is moving to Detroit as he mulls mayoral bid 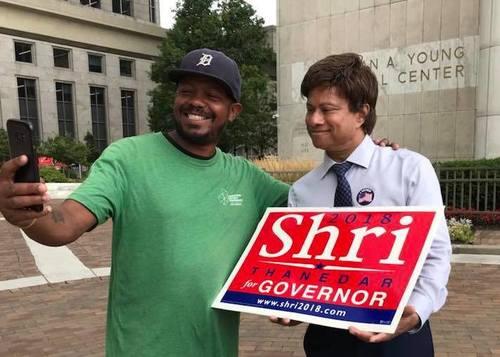 Shri Thanedar is moving to Detroit as he eyes a bid for mayor.

The failed gubernatorial candidate told Deadline Detroit in May that he would move to the city from his home of Ann Arbor if he decided to go up against Mayor Mike Duggan. In a phone call Monday, Thanedar backpedaled a bit and said he would also be open to running for state House, Senate, or Detroit City Council.

Thanedar, a chemist and businessman, spent more than $10 million of his own money running for governor. He came in third in last year's Democratic primary, but won Detroit.

"During my gubernatorial run, I traveled all across Michigan," he said. "But the kind of love I got in Detroit was special. People were very warm to me and it just felt so close. I met many workers and they reminded me of my mother. I just felt at home."

Thanedar grew up in poverty in India and has said parts of Detroit remind him of a Third World country. Issues he wants to address include public safety, early childhood education, and entrepreeurship, though he has declined offer specifics.

Thanedar plans to move to Detroit's toney Palmer Woods neighborhood at the end of the month, though he says he has yet to close on a house. His home in Ann Arbor is on the market for $1.1 million.

Candidates for the various offices for which Thanedar may apply are required to have an address in their districts. Mayoral candidates must have lived in the city for at least one year in order to appear on the ballot.

Thanedar has previously said he would rely more heavily on campaign contributions in a possible mayoral bid. He reportedly had about $30 million in assets before his gubernatorial bid.