Car sideshows are a West Coast export, and Detroit took them to a whole new level on the Lodge 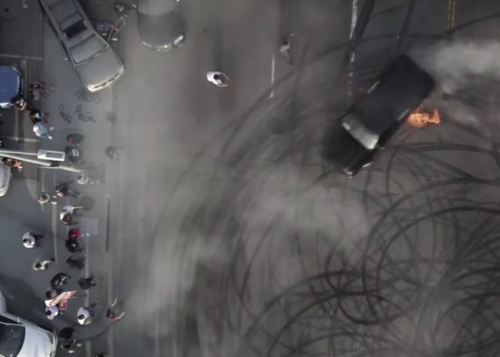 This past weekend in Detroit, a viral video showed traffic on the northbound side of the Lodge completely blocked by a group of Dodge Challenger Hellcats doing tricks.

The “We on the Lodge wit it” crew has become a social media sensation — and a target for police — but it turns out the Detroit drifters are far from the first to take over a roadway to do stunts.

In May, a VICE documentary titled: “Shutting Down the Streets of LA: Sideshow Takeovers" explained the road stunt events are known as "sideshows" and originated in the Bay Area.

The west coast car club featured in the 23-minute video, watched more than 664,000 times, is dedicated to weekly unsanctioned events in LA. Hundreds of cars block the road so the sideshows can take place, as opposed to the roughly handful we saw in Detroit. However — what Detroit may lack in numbers it makes up for in brazenness. Sideshows typically only happen on surface streets; hitting "the Lodge wit it" took things to a new level.

Illegal car events in L.A. have drawn so much attention that the LAPD has created a Street Racing Task Force, using social media to deter those involved in the sideshows.

Detroit Police Chief James Craig held a press conference Monday afternoon putting street racers on notice. “I promise you that Hellcat will be ours,” he said.

They're looking for six suspects in connection with Friday's incident. One person allegedly involved was arrested and his car was seized.