Though the River Rouge School District feels budget pressures and has lower average teacher pay than in four nearby public systems, it has spent more than $288,000 to send administrators on out-of-state trips over the past six years, the Detroit Free Press reports.

Among the trips Rouge administrators have taken in recent years are five to Orlando, four to Washington D.C., three to Chicago, two each to Nashville and Kansas City. Other trips have included Boston, Atlanta and San Diego.

Superintendent Derrick Coleman tells John Wisely of the paper that the travel was for education and leadership improvement.

"This is training that we don't believe we can find locally that's offered nationally," Coleman said. "And so we choose to, you know, send qualified people there. They're bringing that information back."

The reporter also speaks with Eddie Hejka, a former teachers' union local president who quit the Downriver district in 2017 because of what he said was mismanagement. "We can get all the training we want locally," Hejka is quoted as saying. 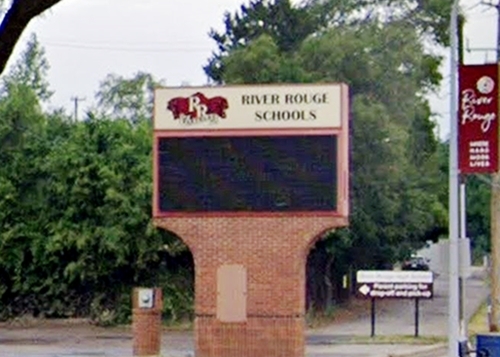 The district offices are on West Coolidge Highway. (Photo: Facebook)

River Rouge spent nearly $23,000 on travel during the past school year, according to the Freep, which add this context:

The Taylor school district spent slightly more than River Rouge, about $25,000, but it has almost three times as many students. . . .

River Rouge has about 2,300 students, about 75% of whom qualify for free or reduced price lunches because their family incomes are so low. Household income in River Rouge is about half the state average, according to census figures. . . .