After years of arguments, tensions and this-has-nothing-to-do-with-race protestations, yet another modification to the Kercheval/Alter Grosse Pointe Park border may be in the works. 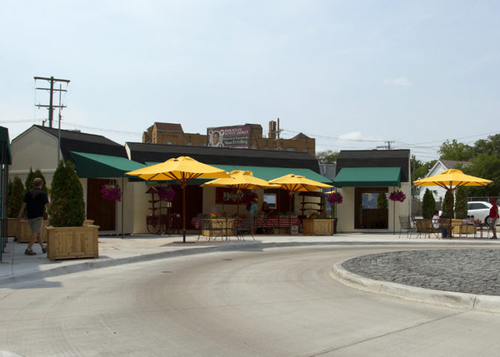 The Neighborhoods, the online presence of the city's "storytelling" department, reports that the cities of Detroit and Grosse Pointe Park are in talks to make several improvements along the Park's western border, including opening the Kercheval/Alter border to two-way traffic again:

The City currently owns a parcel at 15003 Jefferson, which it has planned to sell to the Urban Renewal Initiative Foundation (URIF) for $300,000. As part of the land sale, Grosse Pointe Park has agreed to modify their traffic island located on Jefferson Avenue immediately west of the intersection at Lakepointe Street to make it easier for DDOT buses to turn around and head west on Jefferson Avenue; and construct a parking area for DDOT buses on westbound Jefferson Avenue on land that GPP owns between Maryland Street and Lakepointe Street.

Under the proposal, Grosse Pointe Park will remove portions of the existing plaza, creating a traditional four-way roundabout at Kercheval and Wayburn that allows traffic to enter and exit from Detroit. Once complete, two-way traffic will return for the first time in over five years at the Detroit-Grosse Pointe Border.

That intersection has been the focus of charges of exclusion for some time, since Grosse Pointe Park effectively closed it off during the winter of 2014, by piling snow across Kercheval. This was followed by the later erection of farmers market sheds in the same spot, leading to charges that the majority-white, affluent suburb was trying to wall off the majority-black, poor city to its west. The sheds were replaced by oversized planters, and a roundabout intersection was built, permitting one-way traffic from Detroit into Grosse Pointe Park. A sculpture, "Sails of Two Cities," was installed in the center of it, indicating peace and harmony between the two, but as any fool can see, it's a pretty fraught piece of ground.

The Kercheval commercial district on the Grosse Pointe Park side is thriving, with restaurants and small businesses. The Detroit side continues to struggle, although the adjacent Jefferson-Chalmers neighborhood of Detroit is infused with new business as well, along with special attention from city government.