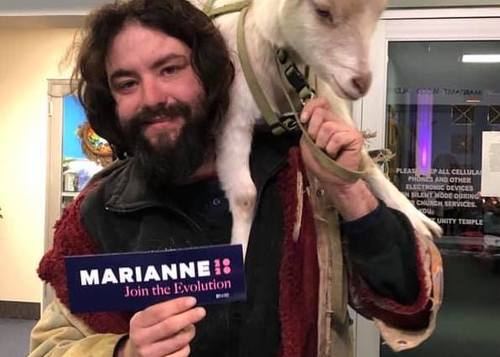 A tragic ending has befallen one man and his deceased goat, Cutie Pie.

Last Friday, WXYZ reported one of two goats owned by the Detroit Goat Man had gone missing. Goat Man, aka Erick Brown, who has been the subject of many media reports in the past couple years, had two goats: Cutie Pie and Deer.

WXYZ reported the Goat Man was concerned that someone might have taken Cutie Pie from his yard in the 7000 block of Omira Street, near E. 7 Mile Road and I-75. According to Detroit police, the goat was last seen in Brown's yard on Thursday and reported missing on Friday.

In a sad turn of events, Brown confirmed to WXYZ Monday that Cutie Pie had been found dead, wrapped in a blanket. No information was provided as to what lead to Cutie Pie’s death.

Brown told WXYZ last week that he relies on the goats for emotional support. He explained that he struggles communicating, and the goats help him. At the time, he pleaded for whoever had information on Cutie Pie’s whereabouts to come forward. He also said Deer, his other therapy goat, was beginning to get anxious, awaiting Cutie Pie’s return.

On Monday, Brown was digging a grave for Cutie Pie in his backyard as his other goat, Deer, looked on.

Brown and his therapy goats could often be spotted around town at the Eastern Market, strolling through downtown, or even riding the bus. Recently, he brought one of his goats to a town hall meeting in Detroit for presidential candidate Marianne Williamson.