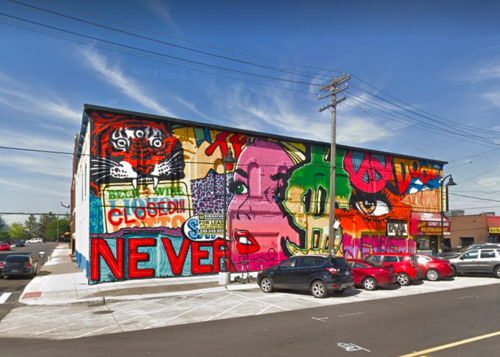 There's a building along the main drag of Eastern Market covered in an anti-gentrification mural. You may know the one — it features images of a shut-down party store, a large dollar sign dripping in green slime, and the words "doom" and "never."

The building is owned by Sanford Nelson, the young investor who, with a team, has spent millions on roughly 20 Eastern Market buildings, prompting multiple businesses to close. And while the mural has on its own proven prophetic for the market, a 2018 Deadline Detroit report came with a bit of foreshadowing too.

In our story on the changes in the area, we noted that Nelson was now in full control of the building's message, and could "paint over it or tear down the whole place and build something new."

Now, seven months later, Nelson has revealed he indeed plans to tear the building down, according to Crain's. The move will spell the end for Mike Coney Island, the only visible business in the 15,000-square-foot space. However, owner "Mike" didn't pin his departure entirely on Nelson, offering Crain's this explanation, which tries to deflect on the razing of the building:

"This is my own decision and has nothing to do with being forced to close."

"Mike" added that Nelson and his investment group had treated him fairly.

Nelson explains to Crain's that the building -- which is really made up of four -- has problems. The foundations are in poor condition, and a wall is buckling, he says.

Nelson, whose moves in the market have been met with trepidation, will use the teardown to give the public a say in his process for the first time. Crain's reports he'll be accepting feedback on what should take the building's place.

[...] those interested can email hello@firmdet.com with the subject line "2701 Russell Street" and offer their suggestions.

"We haven't given the community the opportunity to engage and give input on how to preserve and renew Eastern Market, and that starts now and we want to kick it off with this property," Nelson said.

"We plan to host meetings and we want to listen."

Before Nelson bought the site, a suburban luxury residential developer had reportedly planned a mid-rise 80-unit apartment building with a parking garage.

Marvin Beatty, a connected Detroit developer on Nelson's team, tells Crain's that community input is important to the private investors.

"We would much prefer to structure whatever we do with a plan, not just throwing shit against a wall and trying to figure out how people are going to react to it," Beatty said. "For us, the best thing to do is to plan something, to structure something that we think will work for the entire community."

As for "Mike," it's unclear how long he'll be a part of the Eastern Market community. Nelson tells Crain's he's not sure when he'll level the site.