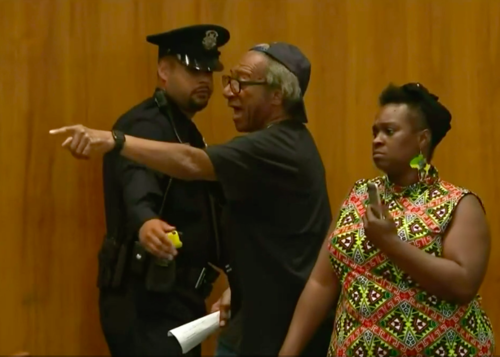 There have been cops, there's been shouting, there's been an assault complaint filed, and still we have not seen it all from the Detroit Charter Revision Commission meetings. At the latest public gathering of the nine-member body tasked with revising the city's guiding document, an activist was arrested for disorderly conduct when he refused to quiet down.

Meeko Williams, founder of water rights group Hydrate Detroit, was escorted from the Tuesday meeting in handcuffs. He says his first amendment rights were violated.

According to WDIV, the commission has voted to hold all future commission meetings at the Coleman A. Young Municipal Center for safety reasons.

The meeting Tuesday was the first since charter commission chair Carol Weaver reported commission vice chair Nicole Small to police after the two were involved in a tug-of-war over a microphone. The investigation was opened and closed without charges.

The commission is supposed to meet for three years to revamp the city charter, which determines the distribution of power in government and how much say residents will have. But little has been accomplished since its seating this winter, with the group divided between a "people's" faction and an accused "corporatist" faction.

At Tuesday's meeting, residents urged the sides to cooperate. The state has the authority to shut the proceedings down if there's no progress. The charter revision could cost up to $1.5 million.