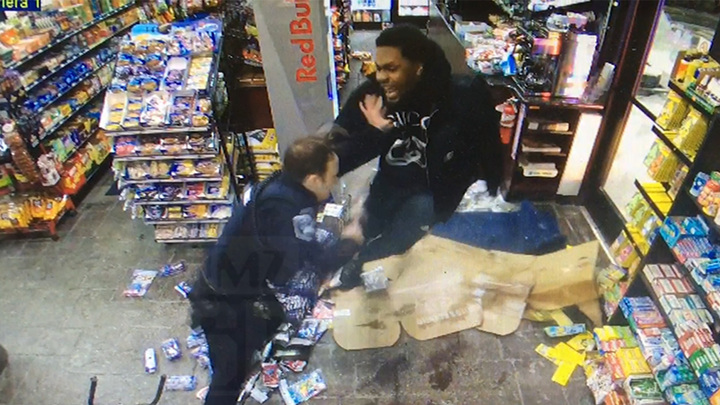 The officer battles with Malik McDowell.

A video shows a Lathrup Village cop tasing former Michigan State football defensive lineman Malik McDowell during a tussle at a Marathon gas station on 12 Mile and Southfield roads during a February arrest.

He was suspected of driving drunk. (See video below)

McDowell, a Detroit native picked by the NFL's Seattle Seahawks in  the 2017 draft's second round, was released from the team March 2, weeks after the confrontation with the officer.

The incident began, according to TMZ, when the officer pulled over Malik McDowell -- a 6'6", 300 pound defensive tackle -- on a snowy winter night. His Jeep was allegedly spinning out after speeding. The stop ends at the gas station, and the cop tells him he was going too fast for the slippery conditions.

McDowell ignores multiple requests for his license and demands to talk to a supevisor. At one point, McDowell, 23, gets out of the car and enters the gas station convenience store. The officer then tries to handcuff him and a struggle unfolds. The officer eventually tasers him. McDowell attacks the officer after being tasered.

A backup officer, who helped subdue McDowell, later wrote in a police report that Malik "grabbed for my gun as I was trying to grab his arm," TMZ reports.

He was charged with two counts of felony assaulting and resisting, a misdemeanor count of operating while intoxicated and misdemeanor driving on a suspended license. He's due in court later this month.