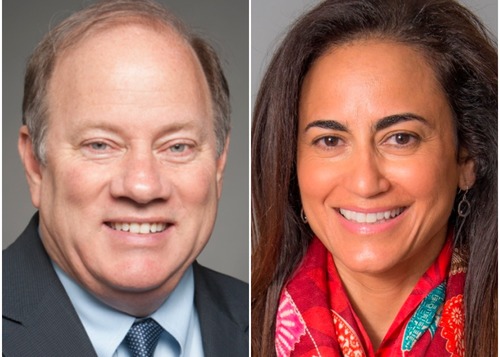 When the Free Press was this winter investigating whether city resources were used to help Dr. Sonia Hassan, the rumored mistress of Detroit Mayor Mike Duggan, something strange happened. The key email that showed employees were ordered to fundraise for the prenatal program she runs came back "corrupted" in a Freedom of Information Act request, forcing the paper to take additional steps to uncover what it said.

It seemed suspicious. But it was nothing compared to what the Free Press has found since: City staff deleted emails pertaining to the Make Your Date program while the paper was probing. And an ex-city official says they were deleted at the order of someone high up in city government.

Kennedy Shannon, the former assistant director who initially made the allegations, said in an interview that one of the employees approached her in April to talk about the deleted emails, days after publication of the Free Press’ investigation into Make Your Date and Duggan’s ties to Hassan. As an assistant director in the Detroit Office of Development and Grants, Shannon worked alongside the employees told to delete their emails.

“I definitely think it’s a cover-up," Shannon said, "and I think it’s an attempt to hide the fact that more city resources were spent ... than what the mayor said they were.”

The Michigan Attorney General's Office and Detroit Office of the Inspector General are both reportedly looking into the deleted emails — the latter as part of a broader probe into whether Duggan gave preferential treatment to the program run by Hassan. The Free Press' initial investigation found hundreds of thousands of dollars in city grants went to the program. Hassan does not make money off of its work.

Viki Harrison, director of state operations for [... Common Cause, a nonpartisan group that advocates for clean government], said city employees being asked to delete emails is the “most basic, unethical thing” government officials could ask of subordinates.

“That's just shocking,” Harrison said. “I mean deleting emails is just the absolute worst, I think, because there's no other reason to do it than to try to hide something. There is no reason to delete an email other than preventing them (the press or public) from finding out the truth. And if you haven't done anything wrong, why would you do that? I can imagine the city attorneys would just have a heart attack if they know employees are doing this.”

Harrison also questioned whether it raises any potential legal concerns for the city.

“They know that's wrong,” Harrison said. “There's a reason why places have retention records. I'm not a lawyer but I would definitely talk to lawyers, because that could absolutely be illegal. It's most certainly unethical. … Quite frankly, if they were told to do this in this instance, the first thought I had is, how widespread is this?”

The city says Duggan learned the emails were deleted in May. The mayor last week reportedly issued a new executive order clarifying the rules for preserving emails.

According to the Freep:

General correspondence records — which city emails are often classified as — must be preserved for at least two years, according to the state policy followed by the City of Detroit. The policy states that “records cannot be destroyed unless their disposition is authorized by an approved retention and disposal schedule.”

Furthermore, records cannot be disposed of if they are part of a Freedom of Information Act (FOIA) request, investigation or lawsuit.