Video: Workers Stand With Bounced Paychecks Outside Locked Doors of Which Wich in Downtown Detroit 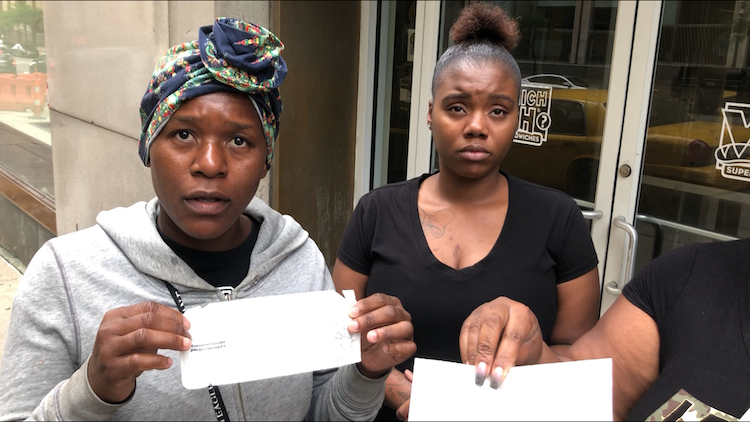 Employees of Which Wich on Griswold in downtown Detroit stood outside the sandwich shop's locked doors Friday morning complaining about bounced paychecks.

Lakisha Williams, who said she has worked full time at the store for six months, showed two recent checks that the bank wouldn't honor. Her checks have been bouncing periodically in the past few months, she says, and sometimes franchise owner John Draper has paid her with cash from the register or out of his pocket.

The store has been closed since late Wednesday.

At corporate headquarters in Dallas, an employee tells Deadline Detroit: "We are working to resolve the issue and make sure those employees get paid." Williams said corporate told her Friday that she'll be paid Monday, though she remains skeptical.

Attempts to contact Draper on Friday at his other Which Wich stores in Grosse Pointe and Southfield were unsuccessful.

Dominique Pickett, the store's general manager who has worked there for four years, says she closed early Wednesday night when employees or their relatives called, threatening her because they didn't get paid.

She said business has been good, so she's not clear what the problem is. Pickett spoke to corporate about the situation, and was told complaints are up to Draper to handle.

The manager doesn't plan to return and doesn't know when the shop -- or if -- the shop will reopen.