Detroit Spirit Plaza on track to close by November 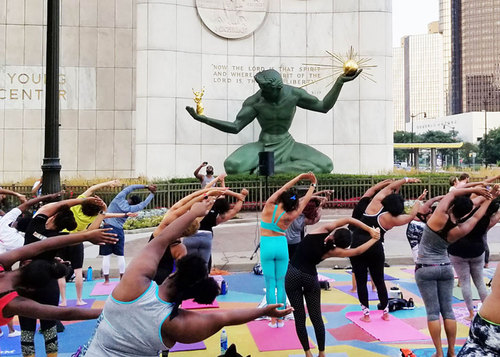 A yoga event at Spirit Plaza. (Photo: City of Detroit)

It's likely the end of the road for a costly and at times underutilized pedestrian plaza that prematurely ended Woodward.

For two years, downtown Detroit's Spirit Plaza has blocked Woodward to traffic between Jefferson and Larned, beginning with a controversial pilot that did not involve city council approval. It had since been permitted to exist on a temproray basis, but on Tuesday, a divided Detroit City Council rejected a plan to make it permanent.

From The Detroit News:

The plaza is an outdoor gathering space with tables, chairs, food trucks, and occasional events, aimed in part to promote foot traffic between Campus Martius and Hart Plaza. It was paid for with hundreds of thousands of dollars from the Downtown Detroit Partnership and taxpayers, with a proposal in the works to spend an additional $800,000 on more programming and a stage.

According to The News, councilmembers opposed to its continuation — Council Chair Brenda Jones and Councilmember Mary Sheffield — cited concerns over traffic and a plan to remove the median. Councilmember Raquel Castaneda-Lopez, who wanted it to stay, said it was a welcoming place for people who may feel unwelcome in some of the commercialized spaces elsewhere downtown.

Brad Dick, a city group executive for services and infrastructure, said Tuesday he was disappointed with the decision and that the administration is looking for a path to bring the issue back before the council. If that doesn't happen, he'll consider next steps.

"This is the people's plaza. This was the place for you to come and voice your opinion publicly, right in front of the seat of government," he said. "We felt the support was there."

Without new approvals, the plaza will have to close by November.