No charges for Detroit police commissioner arrested at meeting 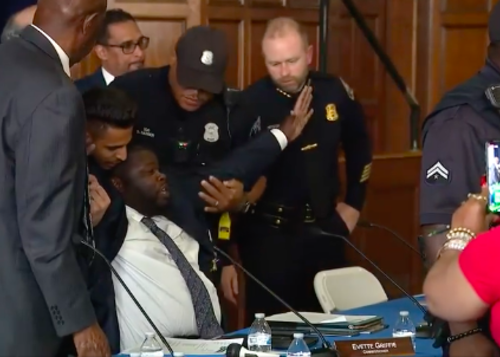 Detroit Police Chief James Craig reportedly says he will not pursue charges against a police commissioner arrested at last week's board meeting after talking out of turn.

Commissioner Willie Burton was ordered removed by Commissoin Chair Lisa Carter during a raucous meeting on the department's use of facial recognition technology.

According to The Detroit News:

Police chief James Craig said Tuesday he decided to drop the matter "after consulting several people, including board members."

"The arrest was legal, and I'm not criticizing my officers," Craig said. "But after weighing the totality of the circumstances, I thought it best to drop the charges, in order to maintain a harmonious relationship with the board and the people who elected (Burton)."

Carter said Tuesday she didn't know Burton was going to be arrested when she asked officers to remove him from the meeting.