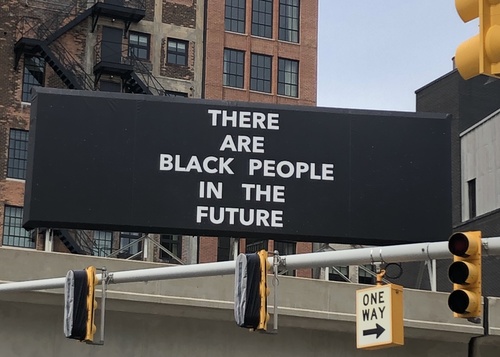 A new downtown Detroit billboard proclaiming "there are black people in the future" may seem to make an obvious statement. But in  majority-black Detroit's downtown — where the demographics have shifted dramatically in the past decade — it serves as a reminder that it's a place where black people still belong.

The billboard by artist Alisha B. Wormsley of Pittsburgh is the first installment of an exhibition titled "Manifest Destiny" that opens Saturday at the Library Street Collective gallery downtown. It's curated by Afrofuturist Ingrid LaFleur, a former mayoral candidate.

The billboard, now above Grand River Avenue, just east of Woodward, sparked controversy when it went up in Wormsley's home city. LaFleur tells Metro Times she wanted to explore that.

"That backlash, which seemed absolutely ridiculous, really made me wonder what does that mean for Detroit at this moment," LaFleur says. "It's a very intense moment where there's a wave of new people moving into the city. And as we know, generally speaking, people's relationship with [the] Black body is very unhealthy."

"I brought this billboard to Detroit," she adds in a gallery posting, "because I wanted to make sure as we add a new influx of people to the city that it is understood that black people are weaving the fabric of Detroit's future. It cannot be avoided, nor should it be."

"People feel left out when you say one group," Wormsley said, "But that's not the purpose. The purpose is to lift marginalized people up so everybody has a future."

Gallery materials quote Wormsley as saying the billboard slogan "started out as a black nerd sci-fi joke -- a response to the absence of non-white face in science fiction films and TV."

"Afrofuturism dares to suggest that not only will black people exist in the future, but that we will be makers and shapers of it, too."

Manifest Destiny will examine "the practical implementation of the cultural movement Afrofuturism to alter destinies within Detroit and beyond." It features "12 artists that explore new modes of thinking, planning, and building for the Afrofuture" and opens Saturday at Library Street Collective, 1260 Library St., Detroit.