Detroit's Shinola Quietly Lays Off Workers -- Minor Adjustment or Sign of Something More? 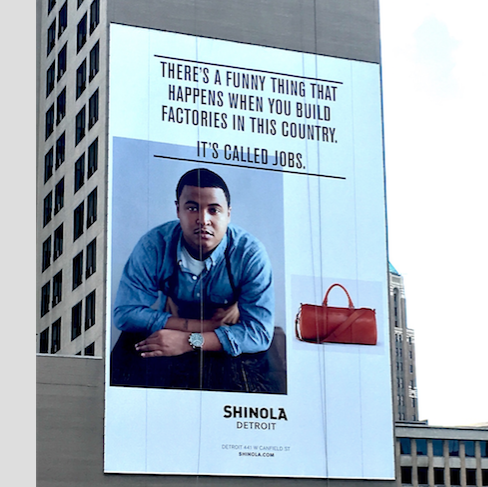 A former billboard in downtown Detroit.

Shinola tells Crain's Detroit Business it has laid off 30 workers — 5 percent of its workforce — as part of a restructuring.

Shinola, the watchmaking company based in Detroit, that has often boasted of creating jobs in a city making a comeback, has laid off some workers.

Daily Detroit reports that more than 20 people have been recently laid off. The website cites Brian Ambrozy, a former employee, and other sources connected to the company.

It's unclear exactly how many workers were laid off, why, and if all were at Shinola's Detroit headquarters.

The company did not respond to Daily Detroit for comment, nor did it immediately respond Thursday night for comment from Deadline Detroit, via email.

The company makes pricey watches, bikes, leather journals and other products. It recently opened a hotel on Woodward Avenue in Detroit under the Shinola name.

At times, it has been criticized for marketing the gritty image of the city while producing a product that many Detroiters can't afford.

The company has often responded by mentioning that it has generated a number of jobs.

The website says that the company, which was founded in 2011, employs more 600 people, with an average of 200 in manufacturing at any given time. It has stores around the world including in California, New York and London.