Woodbridge Debate: Are These Upcoming Condos a Good Fit or Misfits? 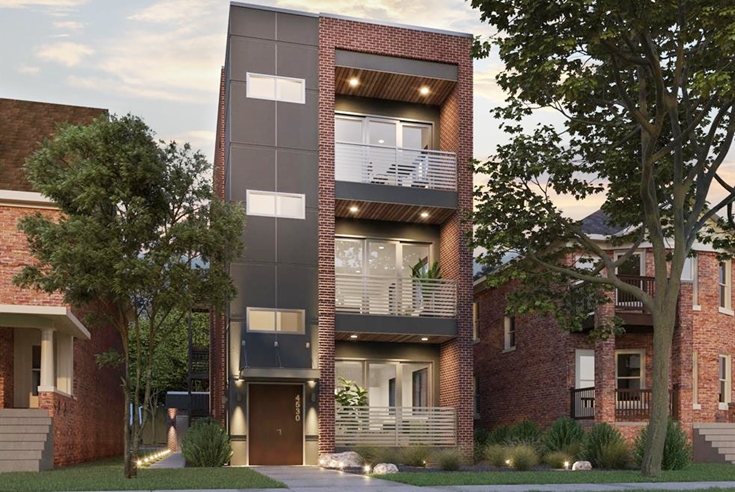 Three condos priced at $349,000 to $369,000 each will fill a floor of this development coming to Woodbridge. (Illustration: Bailey Built, via Realcomp)

Tastes differ, sometimes wildly. That's as true in architecture as in fashion, food, music and art. Still, it can be hard not to judge.

Consider this architectural rendering of three "luxe" condos that will replace a knockdown at 4530 Commonwealth St. near West Forest Avenue in Detroit's evolving Woodbridge neighborhood -- an area recognized since 1980 on the National Register of Historic Places.

The bold-looking project is "set to break ground in August and slated for a spring 2020 completion," editor Aaron Mondry posts at Curbed Detroit. He cuts to the meat in paragraph one:

Woodbridge is mostly known for its tree-lined streets and historic single-family homes built in the early 20th century. A new development will be a rare break from that mold.

He notes later that "multi-story condominiums aren’t common in Woodbridge west of Trumbull Avenue," and adds that the two developers "say they worked hard to maintain the general feel of the neighborhood by including brick masonry, porches and similar color palettes."

Whether the design by Bailey Built of Grosse Pointe Woods succeeds is in the eyes of each beholder. Opinions about the Levels Commonwealth design illustration flow at Reddit's Detroit forum, where these are among two dozen posts Friday:

Back at Curbed, a half-dozen comments include these:

Kevin M. Hill, the agent, cranks up the hype machine in listing language that speaks of "clean and cutting-edge architecture which balances the need for luxe and urban living." It adds:

"Situated in the historic tree-lined Woodbridge neighborhood, Levels Commonwealth is an urbane oasis in one of Detroit's most thriving communities."

Here's how the 4500 block of Commonwealth looks before excavations on the vacant parcel: