Metro Detroit attorney Andy Doctoroff identifies himself on LinkedIn as "a senior advisor to Michigan Governor Rick Snyder," a title that changed Jan. 1.

Gov. Gretchen Whitmer's administration is slashing in half a $499,999, 15-month contract that . . . Snyder's office awarded one of his longtime aides to continue being the state's point-person on construction of the Gordie Howe International Bridge.

The Democratic governor's administration is reducing the contract for attorney Andy Doctoroff to $205,000 for a new 12-month term, Whitmer spokeswoman Tiffany Brown said. . . . "The compensation was too much," Brown told Crain's. 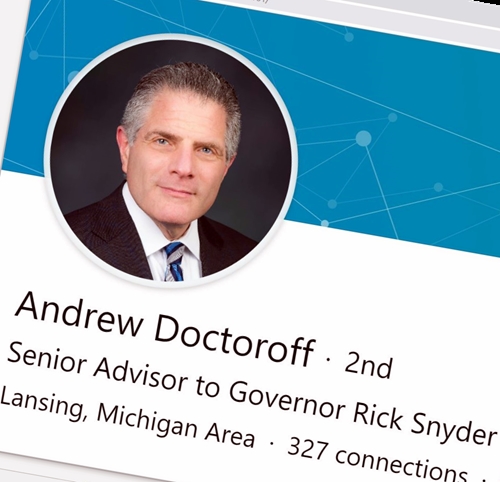 The state project consultant has a revised contract, but an unchanged LinkedIn bio.

The Huntington Woods lawyer's obligation to work at least 1,200 hours a year is unchanged, Brown tells the Detroit journalist. That means his hourly rate under the state contract falls from $332 to $170.

Doctoroff, raised in Oakland County, tells Livengood he's "very happy to continue working on this vital project." The 56-year-old's duties involve managing "project-related activities of several dozen individuals and [serving] as the point of contact with officials at all levels of the City of Detroit, state, federal and Canadian governments," the appointee's LinkedIn page says.

He became a senior special projects adviser in Snyder's office during the bridge's pre-construction stages. Groundbreaking was a year ago this month and the span named for the late Red Wings player is expected to be done in 2024.