The writer is a former Free Press reporter, and Deadline Detroit contributor. He is a member of Belle Isle Concern.

High water in the Great Lakes is more than a nuisance, depending on where you look. 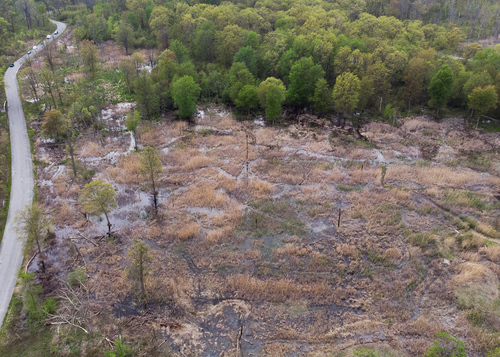 In addition, the Coast Guard station has been using a generator for weeks after flooding knocked out a substation on the eastern end of the island, Olson added.

The flooding is due to record water levels on Lake St. Clair and the Detroit River – and an ill-timed project that has allowed water into all the park’s canals, three inland lakes, and low-lying wooded areas.

Thirty-one picnic shelter reservations were canceled because of the flooding, park officials say, and 45 more rentals for August will have to be relocated. In addition, the Belle Isle Boathouse cancelled 14 weddings and two other events planned there.

At the meeting, Army Corps of Engineers hydrologist Lauren Fry gave a presentation documenting the 100-year records being approached or broken on most of the Great Lakes this summer.

“The high water levels just happened to coincide with the Lake Okonoka project,” Olson said. That project, using a federal grant and managed by the Friends of the Detroit River, opened the Blue Heron Lagoon and the connecting lakes and canals on Belle Isle to the mouth of the Detroit River and Lake St. Clair. Easterly winds have for months pushed the lake water into the park. “Our pumps in the canals can’t keep up with the flooding,” Olson noted.

The final step in the project is a culvert that would connect Lake Okonoka to the Canadian side of the river under the Strand. That would provide an outlet for some of the water being pushed off Lake St. Clair, but it cannot be done until late this year because, again, the water level is too high.

In the meantime, electrical power in the park apparently is safe for now as park officials scramble to mitigate the flooding. Among other measures, the DNR is spending $100,000 to buy and install a portable cofferdam to hold back the very water the Okonoka project let in and allow some pumps in the park’s canals to try to alleviate the flooding.

Until that or other solutions bring the situation under control, both the island’s perimeter road and Central Avenue through the woods are closed because of the high water. For weeks, Oakway Drive has been the only way to reach the Nature Center, the golf driving range and the Detroit Yacht Club.

This month, the flooding even reached Lake Tacoma on the western end of the island, extending onto most lanes of the Strand and lawn areas near the Whitcomb Conservatory. Then, earlier this week, the river levels dropped a few inches – for reasons no one could explain – and waters in the park receded a bit.

At the Thursday meeting, Penske Corp. executive Bud Denker, who has a seat on the advisory committee, asked Fry what her prediction was for next summer. When she replied that she couldn’t say and the water could be just as high in twelve months, Denker looked concerned – and rightly so. The Lake Tacoma overflow has been flooding the Grand Prix racetrack for much of the past month.