A Texas artist's design is above East 7 Mile in the Sherwood neighborhood. (Photo: Instagram/SaveArtSpace)

Bilboards pitch more than products, brands and events. Some oversize signs on stilts push thought-provoking messages into the marketplace of ideas.

One of about a dozen examples now on view in Detroit, each designed by an artist, is the display above by Jonah Welch of Austin. It went up two weeks ago on East Seven Mile Road at Kempa Street near the Osborn neighborhood. 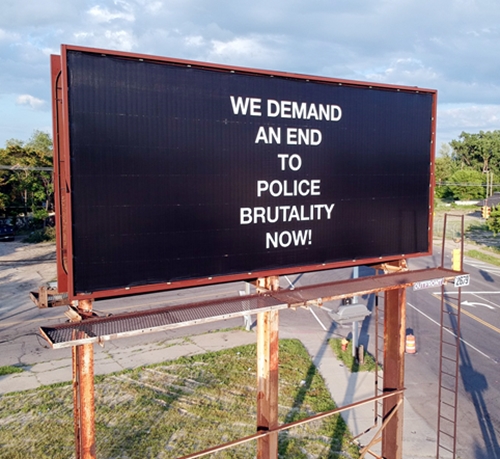 The east-side splash and a more prominent downtown message created by Alisha B. Wormsley of Pittsburgh -- There Are Black People in the Future -- are part of the second annual Detroit Art Week. That five-day series of events, which ended Sunday, spills over into related exhibitions.

Welch's billboard is part of a citywide "Signs of the Times" series of 10 billboards pictured here and shown in the half-minute video below. Though most have artwork without slogans, some carry stark messages.

"Climate Change Is a Global Emergency" says a collage by project curator Ellen Rutt of Detroit that's at East Grand Boulevard and Cameron Street. "We Demand an End to Police Brutality Now" is a white-on-black statement by Adeshola Makinde of Grand Rapids, displayed at West Warren Avenue and Wesson Street.

The project is presented by Playground Detroit, a gallery at 2845 Gratiot Ave. where images of the billboards are on view through Aug. 4, and by SaveArtSpace, a four-year old nonprofit launched in Brooklyn to "address intersectional themes and foster a progressive message of social change." It adds: "By placing culture over commercialism, SaveArtSpace aims to empower artists from all walks of life and inspire a new generation of young creatives and activists." 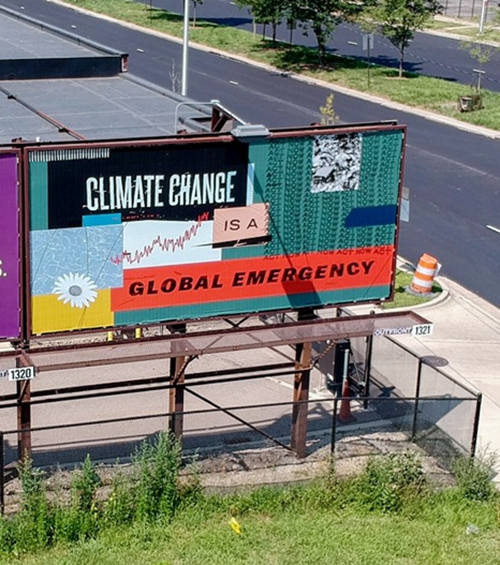 The Austin billboard artist behind "Trans People Are Sacred" fits both of those labels at the end. Welch is a 24-year-old "nonbinary visual artist" who uses the pronoun they and speaks with BuzzFeed News about the creation displayed above East 7 Mile Road in Detroit:

The phrase itself is something they heard from a friend years ago that always stuck with them. It made them feel like their trans identity wasn't just okay, but a gift.

"It impacted me really deeply and it’s become a big part of my belief system," said Welch. "I know when I first heard that message it really moved me beyond the oppression I was feeling in the day-to-day. There’s more to defining and valuing myself than the material struggles we have. . . .

"I just hope people feel free and joyful when they see it, especially trans folks."