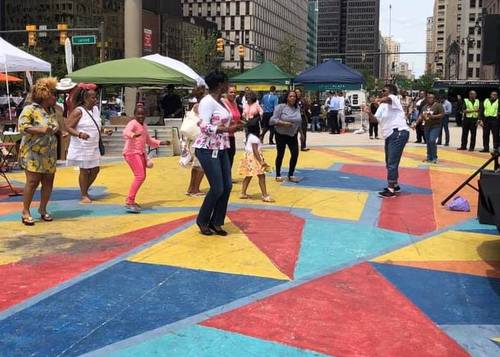 The controversial pedestrian plaza that blocks off the first block of Woodward in downtown Detroit is here to stay.

In a reversal, Detroit City Council on Tuesday approved making Spirit Plaza a permanent fixture, a week after it rejected the plan in a 4-4 vote.

Councilmember Andre Spivey, who was absent for the initial vote, tipped the scales in favor of removing the median and keeping the plaza during a reconsideration vote. The issue was resurrected by Councilmember Scott Benson.

For two years, downtown Detroit's Spirit Plaza has blocked Woodward to traffic between Jefferson and Larned, beginning with a controversial pilot that did not involve city council approval. It had since been permitted to exist on a temporary basis.

The brainchild of outgoing planning director Maurice Cox, the plaza is an outdoor gathering space with tables, chairs, food trucks and occasional events, aimed in part to promote foot traffic between Campus Martius and Hart Plaza.

It was paid for by the Downtown Detroit Partnership and taxpayers, and councilmembers were to vote Tuesday to spend an additional $800,000 on additional programming and a stage.

According to The Detroit News, councilmembers opposed to its continuation — Council Chair Brenda Jones and Councilmember Mary Sheffield among them — cited concerns including traffic, emergency vehicle access and a plan to remove the median. Sheffield added that a planning study on the plaza was not yet complete.

Those in favor of keeping the plaza — just across the street from the at-times-underutilized Hart Plaza — felt it was more important than those issues. Councilmember Raquel Castaneda-Lopez said it was a welcoming place for people who may feel unwelcome in some of the commercialized spaces elsewhere downtown.

A Detroit resident took issue with the reconsideration, saying the plaza is a waste of resources.

“No means no,” the woman said. “They’re gonna spend $800,000 … we don’t have speed cushions in our neighborhoods, we lost our [rec] center. You must remember the people is the one who elected [the councilmembers] for the best interest of us and not for the administration and their appointees.”