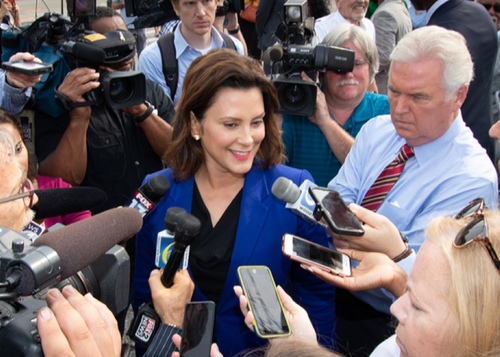 That proposed 45-cent-per-gallon gas tax to fix the roads could be replaced with a graduated income tax that spares low earners from footing the bill for a roads fix.

The Detroit Free Press reports that bills introduced in the Michigan House seek to raise $2.5 billion — the same amount Governor Gretchen Whitmer says is needed to fix the roads — via such a tax.

As the governor and Republican lawmakers approach an impasse over the 2020 budget, the idea of moving to a graduated income tax is gaining traction in Michigan.

Whitmer, who has proposed a 45-cent-per-gallon hike in Michigan's fuel tax, said during her 2018 campaign that if lawmakers are not prepared to approve higher user fees to fix the roads, she is prepared to take her case to the voters.

It's looking increasingly likely that if Whitmer and Republican leaders don't reach a deal on significant revenue increases, Michigan voters could be asked to approve a graduated income tax, often referred to as a progressive income tax, possibly as early as the November 2020 election.

Whitmer distanced herself from the plan, but said she'd be open to it.

"It's my understanding that there are some that are working on that kind of a proposal," Whitmer told the Free Press during an appearance in Flint Tuesday.