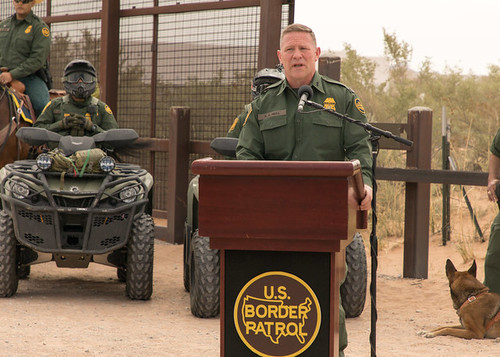 An El Paso Border Patrol chief accused of subjecting detained migrants to unsafe and unsanitary living conditions has been transferred to Detroit, where he'll lead on an interim basis operations in Michigan, Ohio, Illinois and Indiana.

Hull made headlines earlier this year after a federal inspector general issued a warning over "dangerous overcrowding" in migrant centers he oversaw.

The Detroit Free Press reports human rights and other advocates in the area are concerned about the appointment.

"I personally toured CBP Station 1 and the Clint [Texas] facility with Chief Hull," [said Congresswoman Rashida Tlaib, (D-Detroit).] "Chief Hull has done the bidding of this Administration with intolerable consequences for immigrants, and even to the detriment of his own agents. I witnessed agents breaking protocol in front of Chief Hull while on my tour, which makes me concerned he allows bad behavior to continue without accountability.

"I have deep concerns that Chief Hull will bring the inhumane conditions and dehumanizing behavior I witnessed at the southern border to Metro Detroit."

The transfer of Hull has caused some concern among regional immigrant advocates. Lynn Tramonte, director of the Ohio Immigrant Alliance, said Hull's transfer is "very bad news for Ohio & Michigan."

Due to its proximity with Canada, all of Michigan is considered a border zone. That gives federal immigration agents enhanced powers to search people or vehicles.