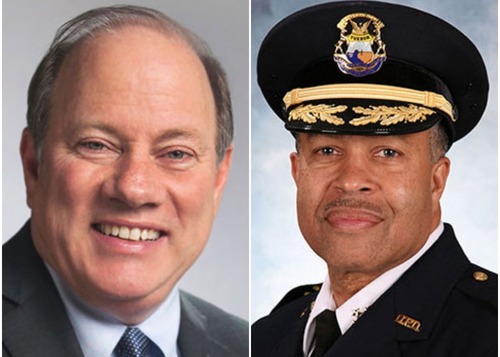 Detroit's mayor and police chief have launched a unique initiative they think may help quell crime in the city amid a particularly violent summer.

According to WWJ, Mayor Mike Duggan and Chief James Craig two weeks ago began meeting over pizza with residents with criminal records to seek their help and input on how the city can reduce crime.

"What I would do with any other issue is, I would sit down with the people affected and have a conversation, so I said why don’t I sit down with some of these people," Duggan told WWJ this week. "They’re not going to be arrested, they’re going to be fed, and they are not the least bit shy about expressing their feelings about the police and their neighborhoods and what they’d like to see."

The city may offer neighborhoods where the ex-criminals live additional resources if they're willing to cooperate, the mayor said.

"They talk to us about ... their aspirations, and if they had a job that was good-paying," he said. "I had one young man who is probably 22 years old, he said, 'I've got two children myself. If I could find a different life that didn't involve shooting in my neighborhood, I'd want to be part of that.'"

The initiative appears to somewhat resemble the city's Ceasefire intervention program, which aims to pull gang members out of that lifestyle by connecting them with jobs and services.

Duggan says there will be more meetings in coming weeks.