Outside the Detroit Dem debate, a rowdy scene for a rowdy party 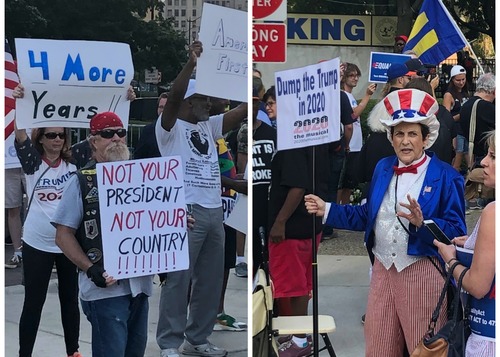 Around the time the Nathan Phillips showed up, who you probably remember as the Native American guy who tangled with the Covington high school kids back in whenever-that-was, you knew this wasn't going to be just another damp, earnest demonstration. This was going to be fun.

Sequestered on one side of Grand Circus Park, a small-but-loud pro-Trump contingent stood under Hazen Pingree's bronze likeness, a small band playing "CNN Sucks," which one gathers is building into something of an anthem for the pro-Trumpers. If you haven't heard it yet, you probably will.

(It should be noted here, because it's kinda funny: Hazen Pingree was a Republican, William Maybury a Democrat.)

All of this was, of course, the non-ticketed version of the Democratic presidential debate happening a block down the street. Al Sharpton was there, but Rashida Tlaib, knowing who sent her to Washington, was in the no-ticket crowd, marching next to Detroit activist Sam Riddle. Police watched from horseback, keeping the two sides apart, although they mainly ignored one another.

About the time Phillips appeared, the chanting was at a peak. And then, because this is Detroit and nothing is too weird, here came ... a tractor. Towing a trailer stacked with hay bales, with young people sitting among them. It was a hayride for clean air, a healthy planet, green union jobs.

Between the two camps an older man, unaffiliated with either, pedaled slowly back and forth on a three-wheel bike. As he passed the police, he raised a middle finger to every badge. They ignored him. He kept doing it.

The Trump Unity Bridge, which some guy tows around to events like this, rolled by the perimeter, blasting Aretha Franklin's "Think," probably because the chorus features the Queen of Soul crying FREEDOM. Was Aretha also rolling in her grave? Hard to hear in the cacophony.

Soon it was time for the main event to start, for half of the 20 Democrats who want to govern this rowdy bunch, both sides of the street. The hayride, the bridge, the drummers had dispersed. Bernie would soon be talking about the cost of insulin in Canada. This was Night #1. 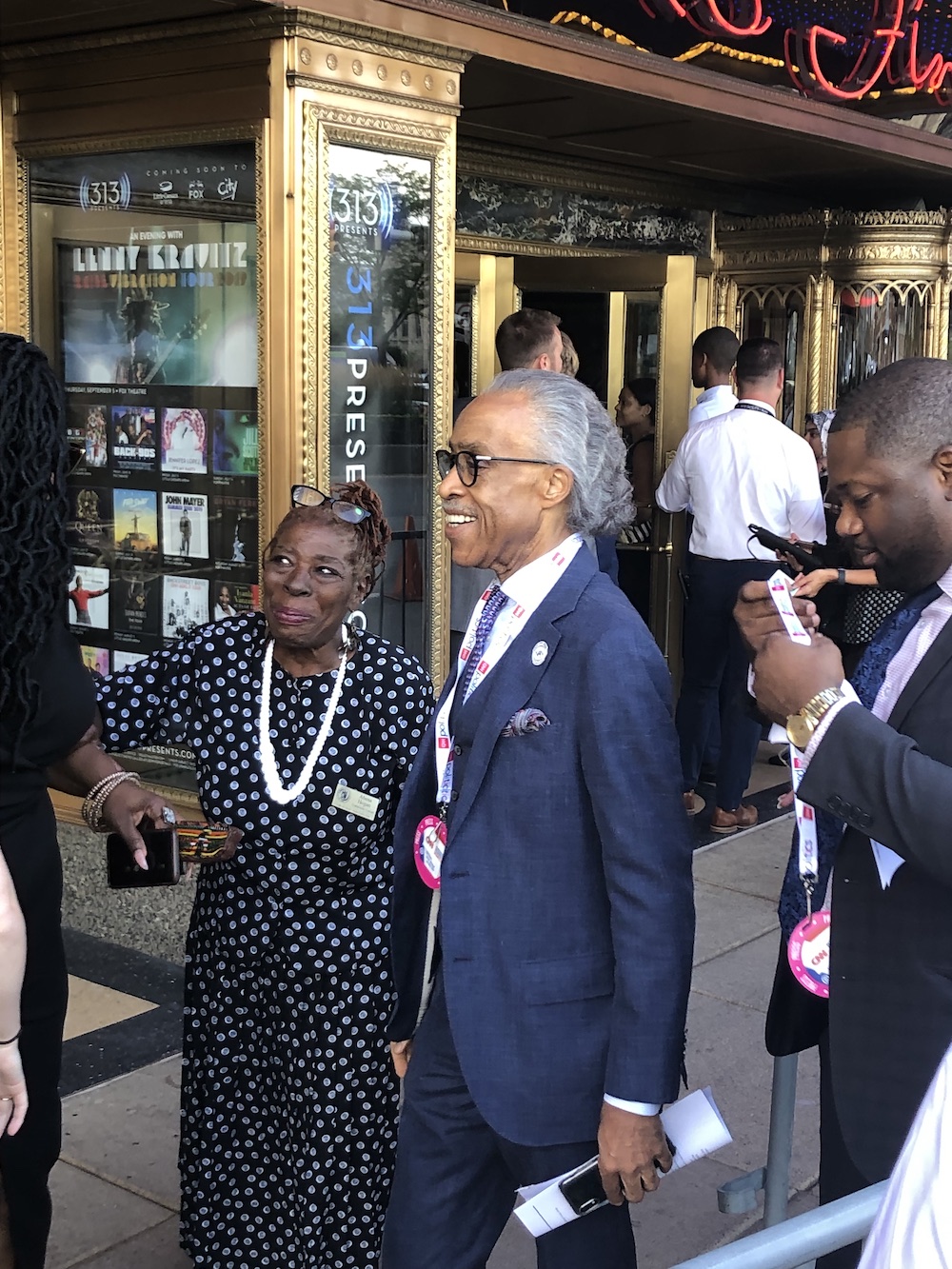 Rev. Al Sharpton is in the house. (Photo by Allan Lengel) 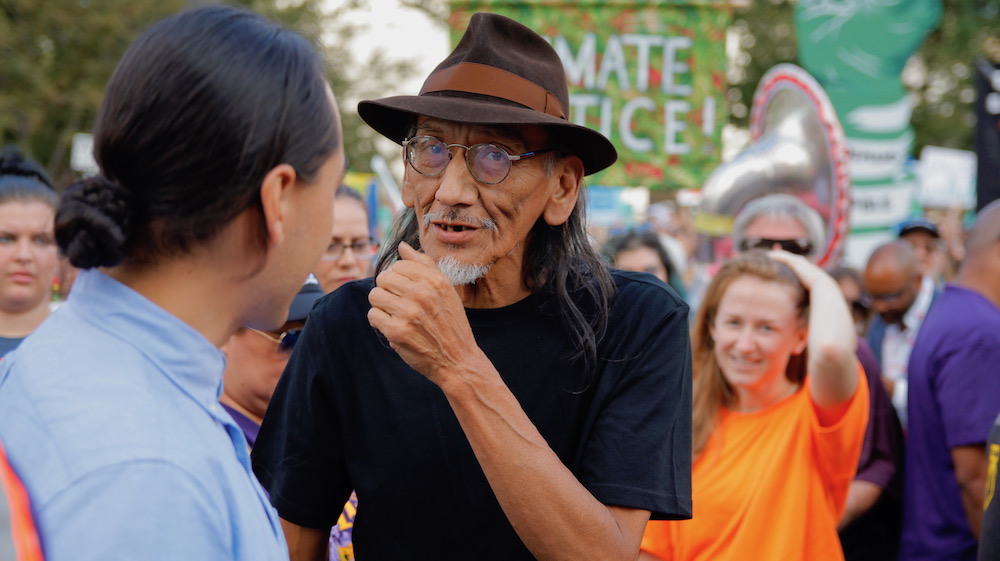 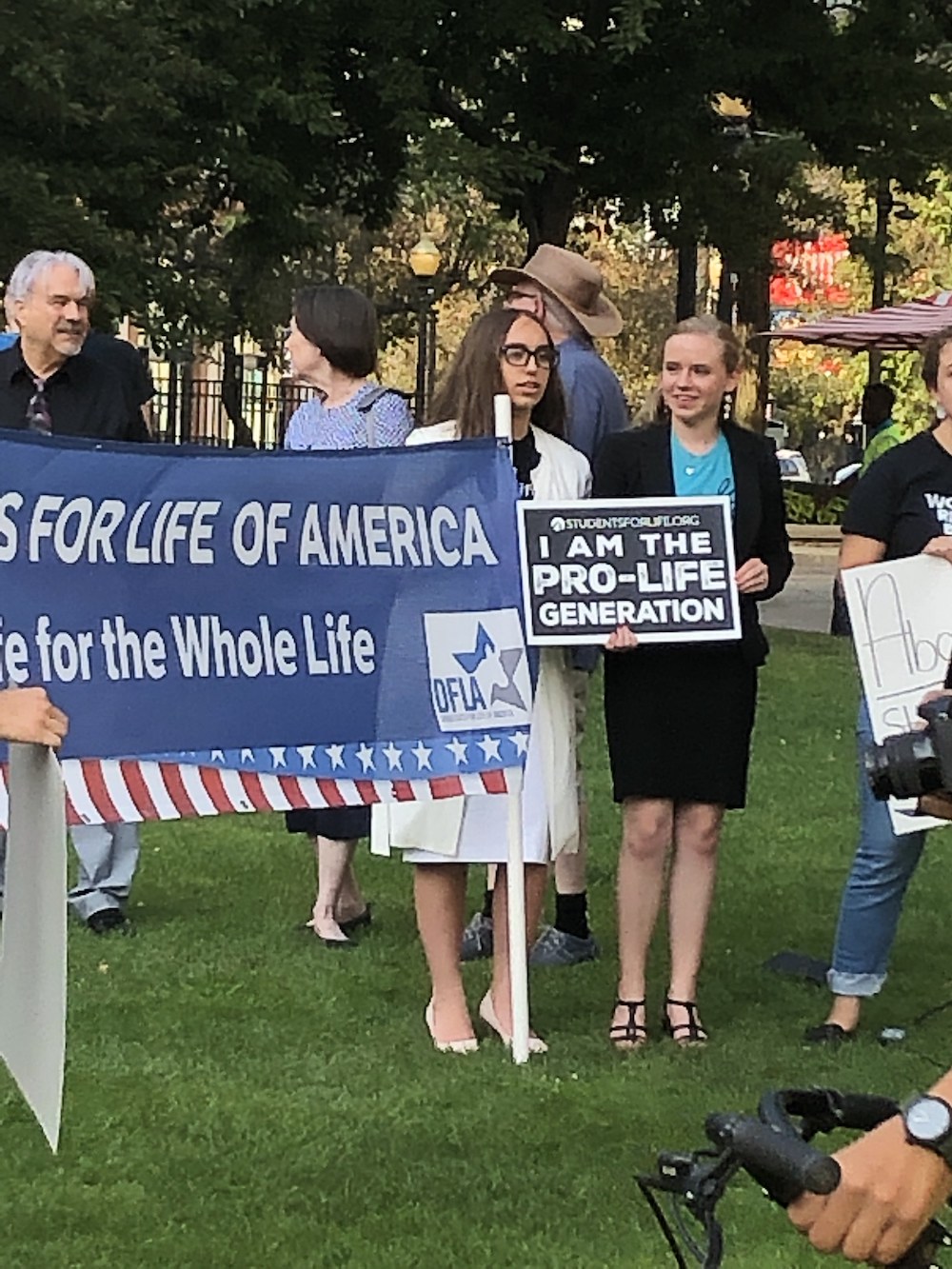 What's a party without pro-lifers? (Photo by Allan Lengel) 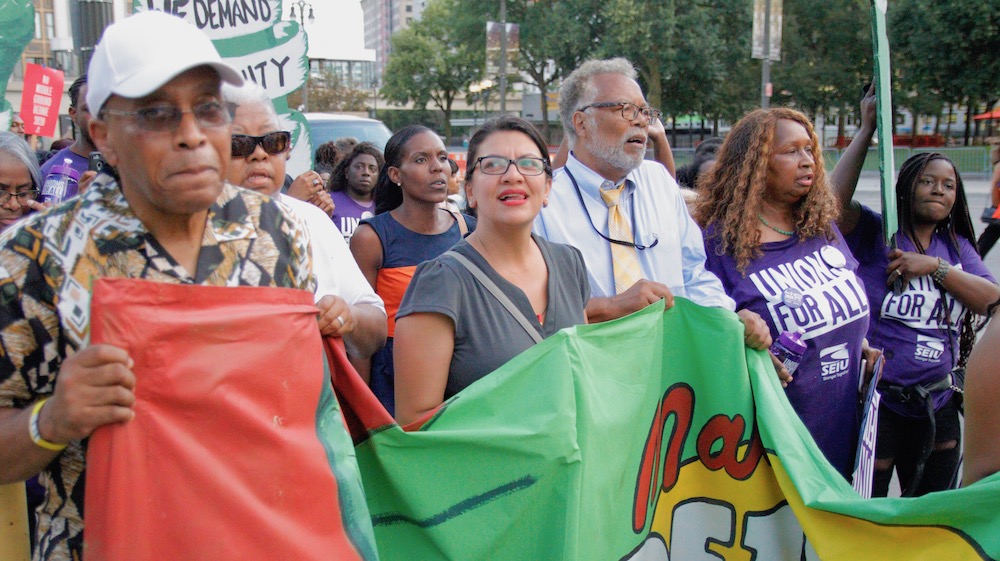 Rep. Rashida Tlaib made an appearance. (Photo by Michael Lucido) 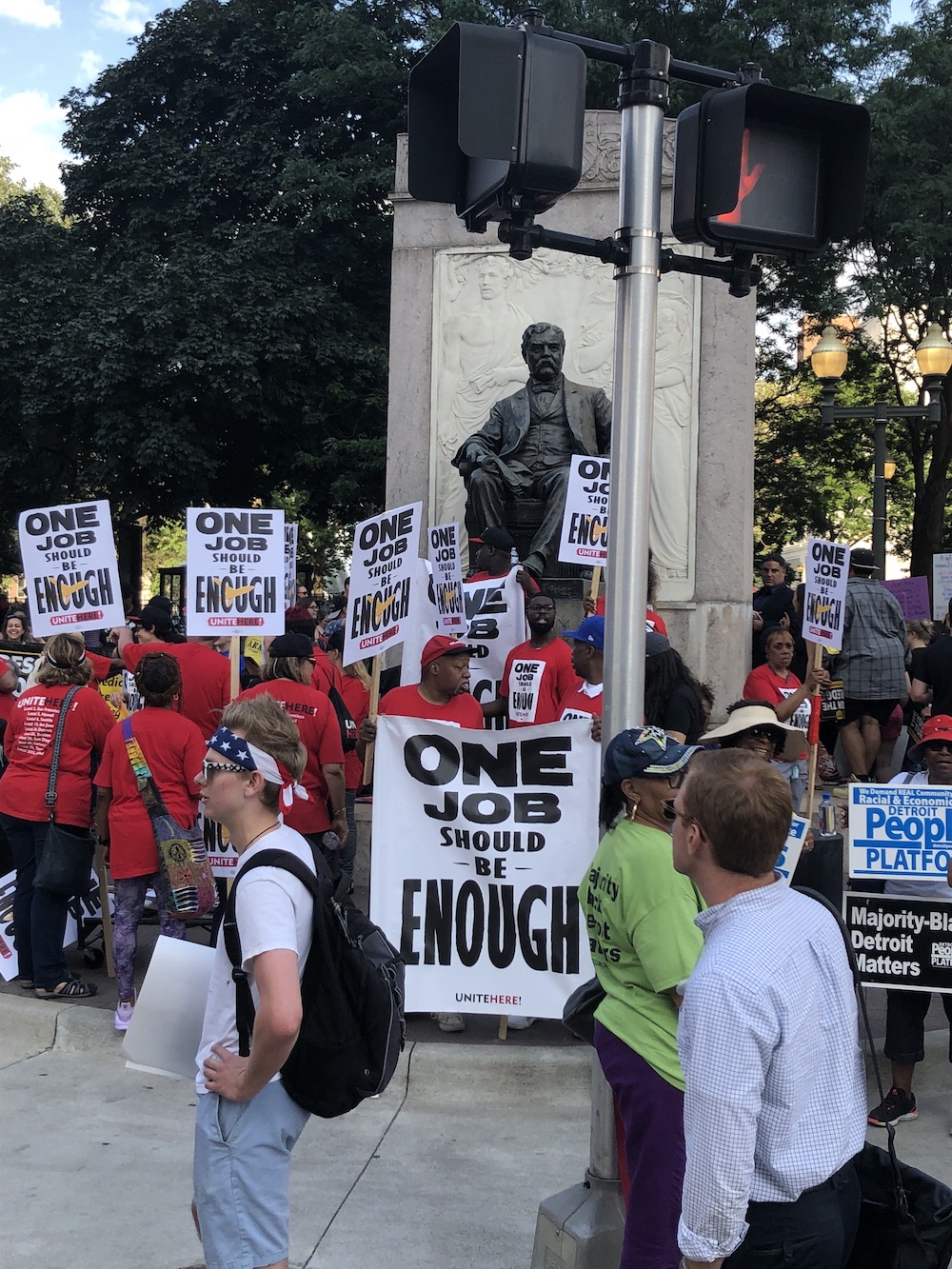 A group pushing for fair wages. (Photo by Allan Lengel) 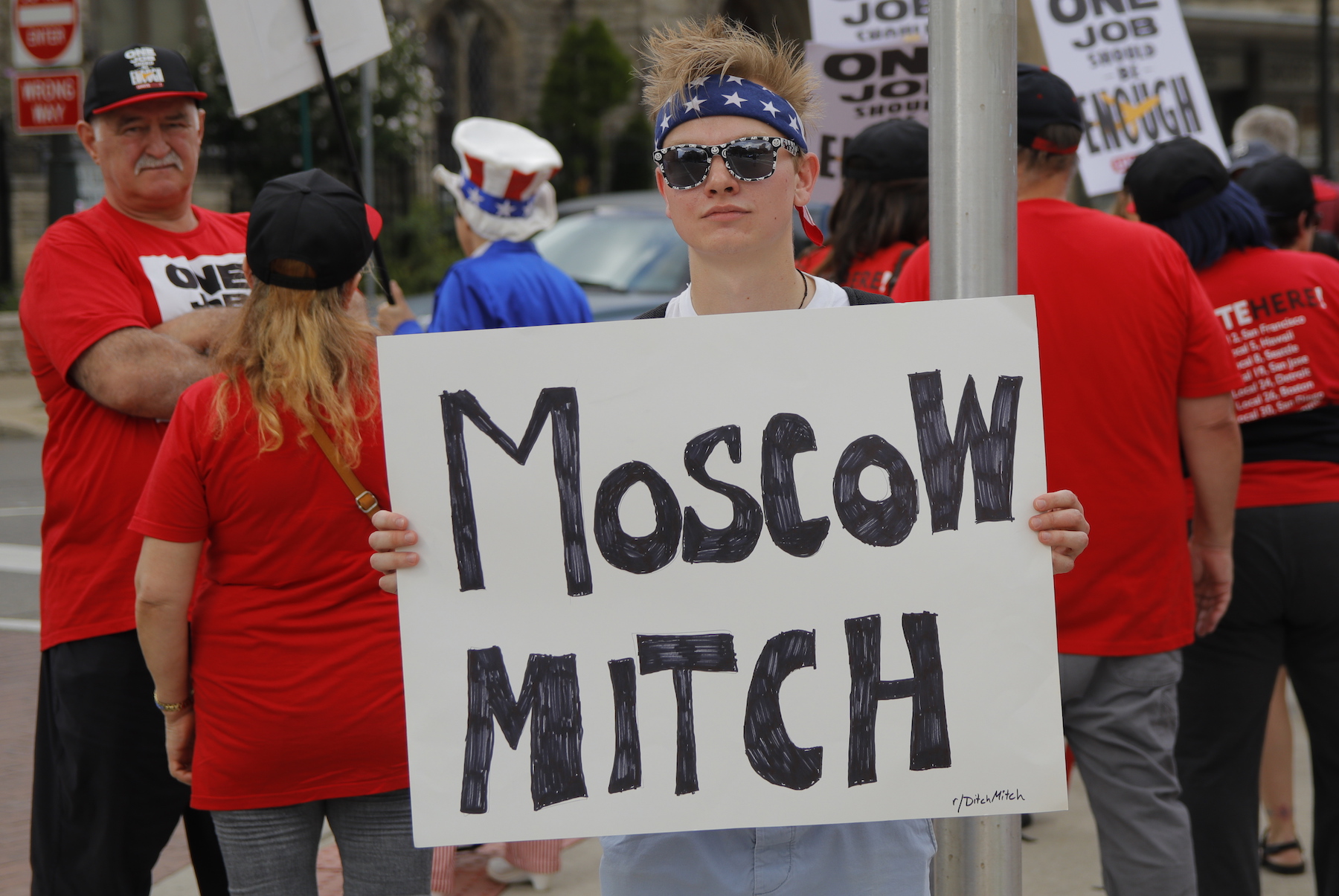 A new nickname for Mitch McConnell. (Photo by Michael Lucido) 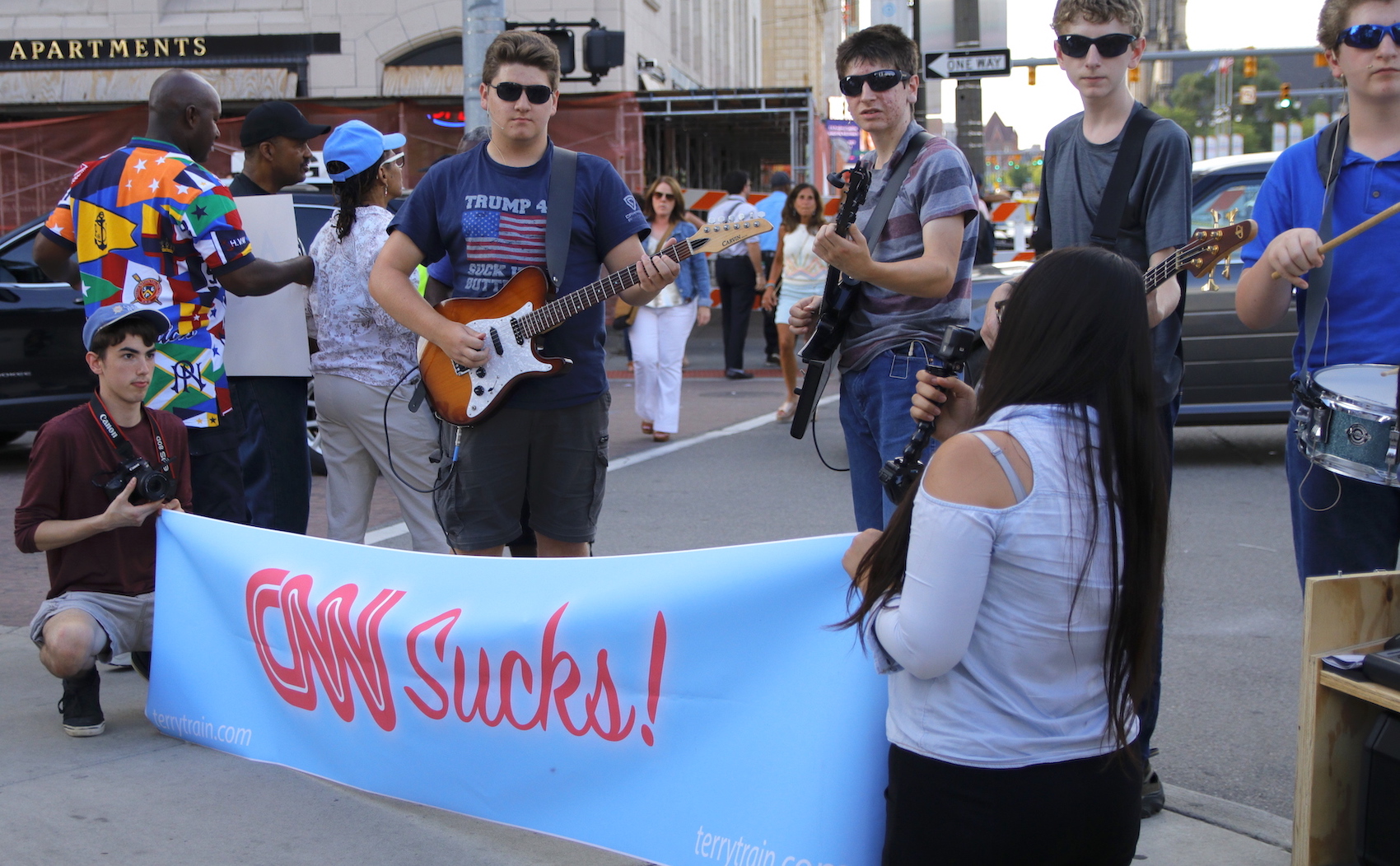 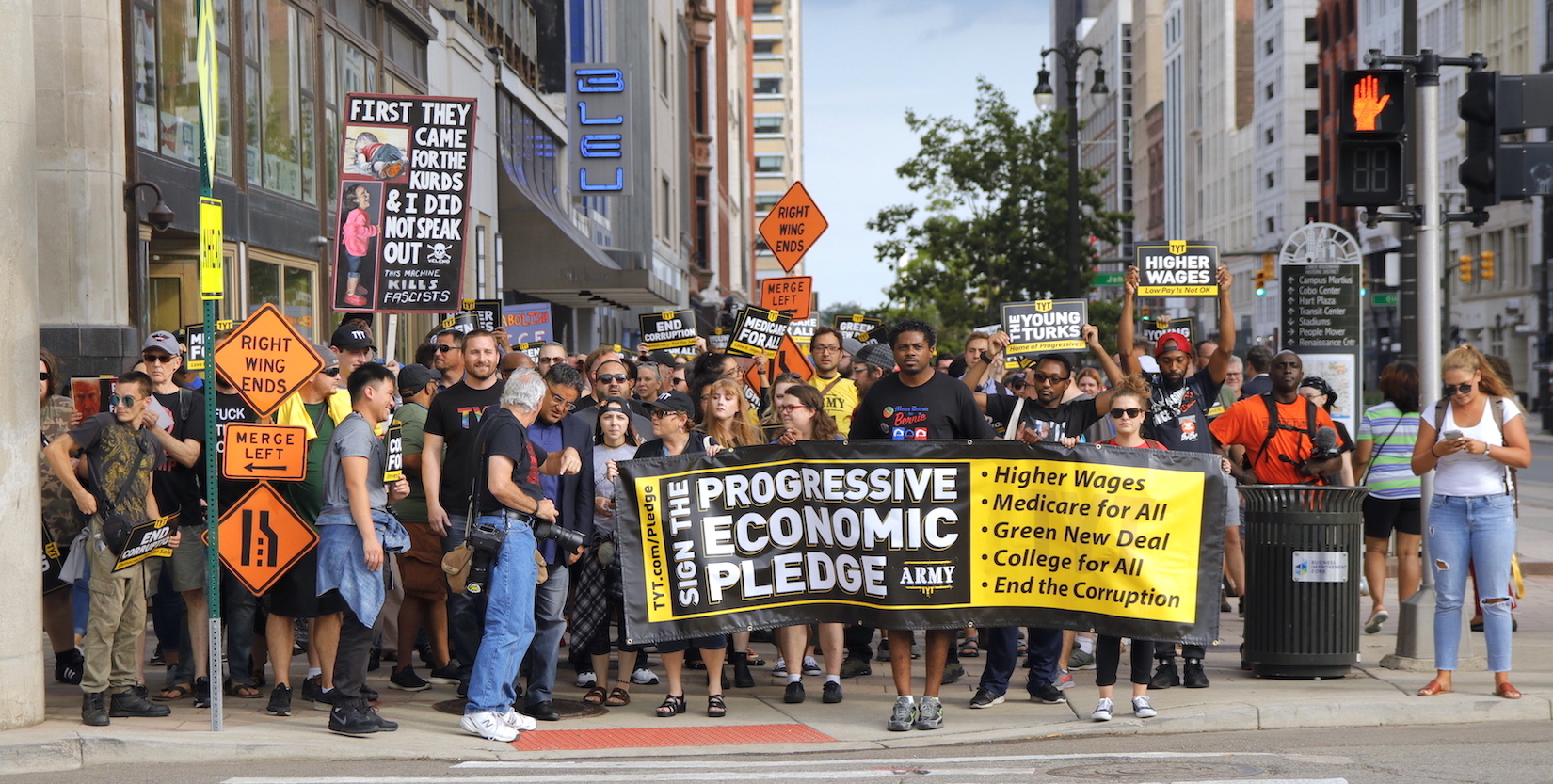 The Young Turks leading the charge for a large demonstration. (Photo by Michael Lucido) 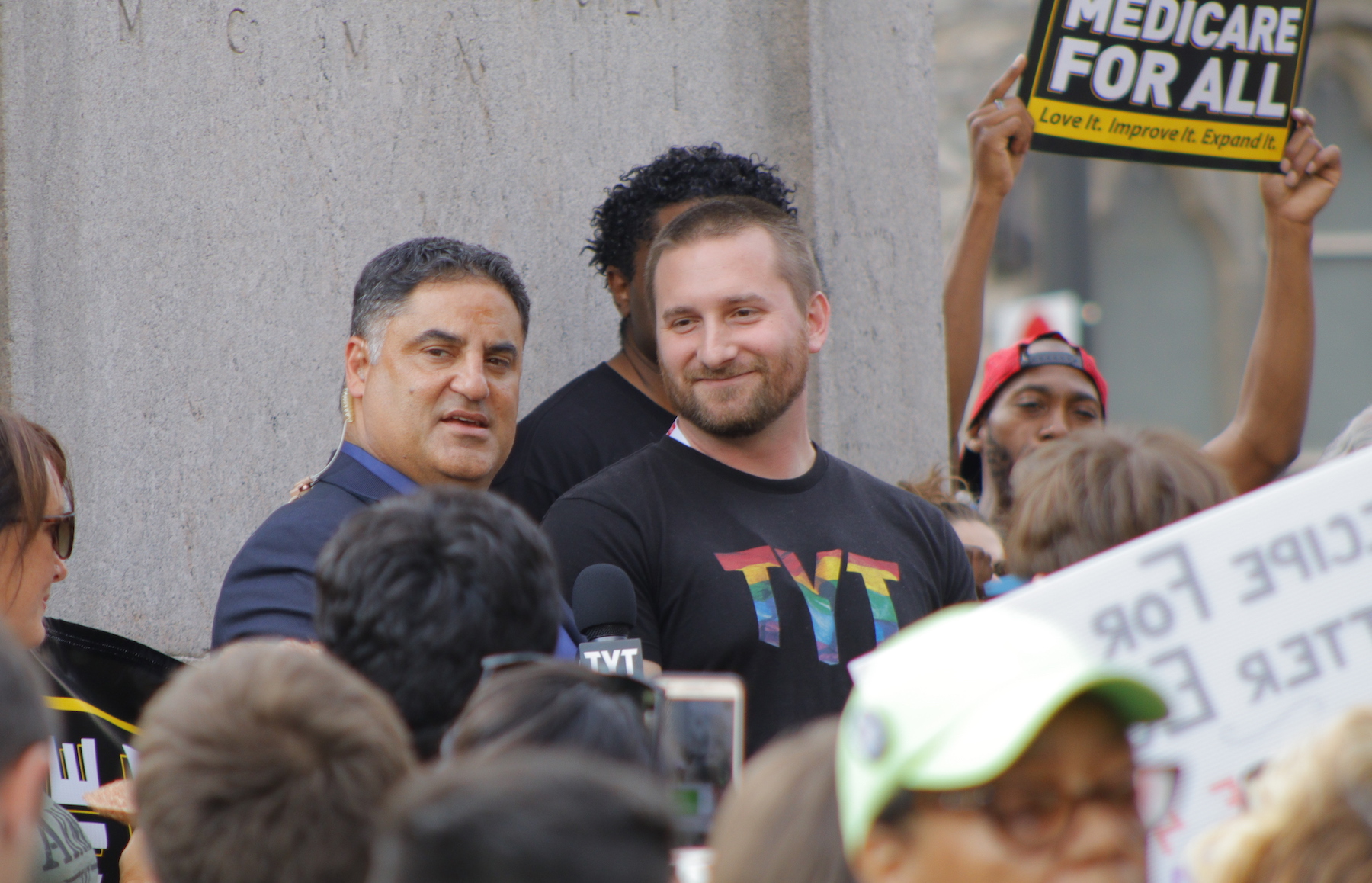 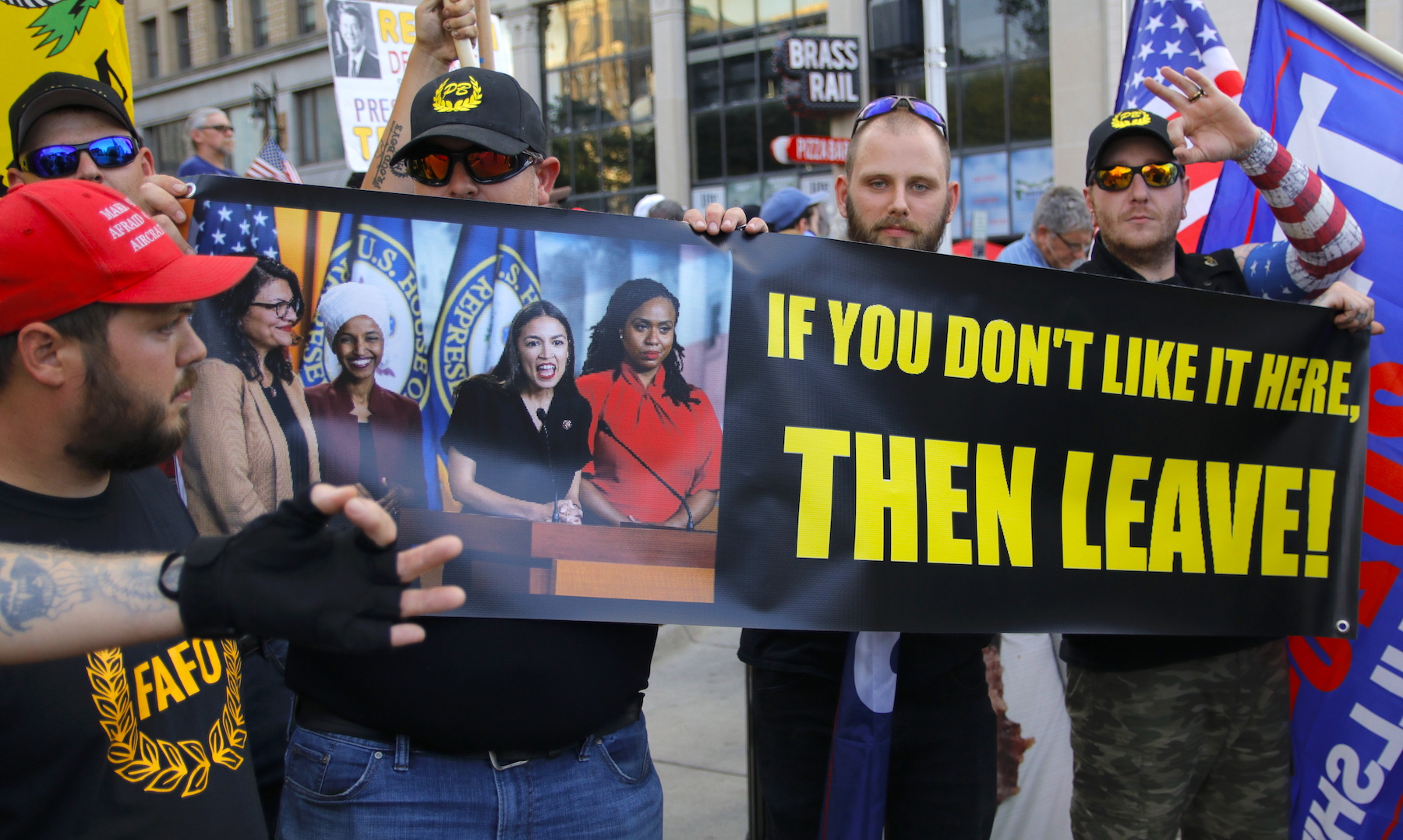 Messages being sent out loud and clear. (Photo by Michael Lucido)

The more progressive side of Woodward forming a large group. (Photo by Michael Lucido) 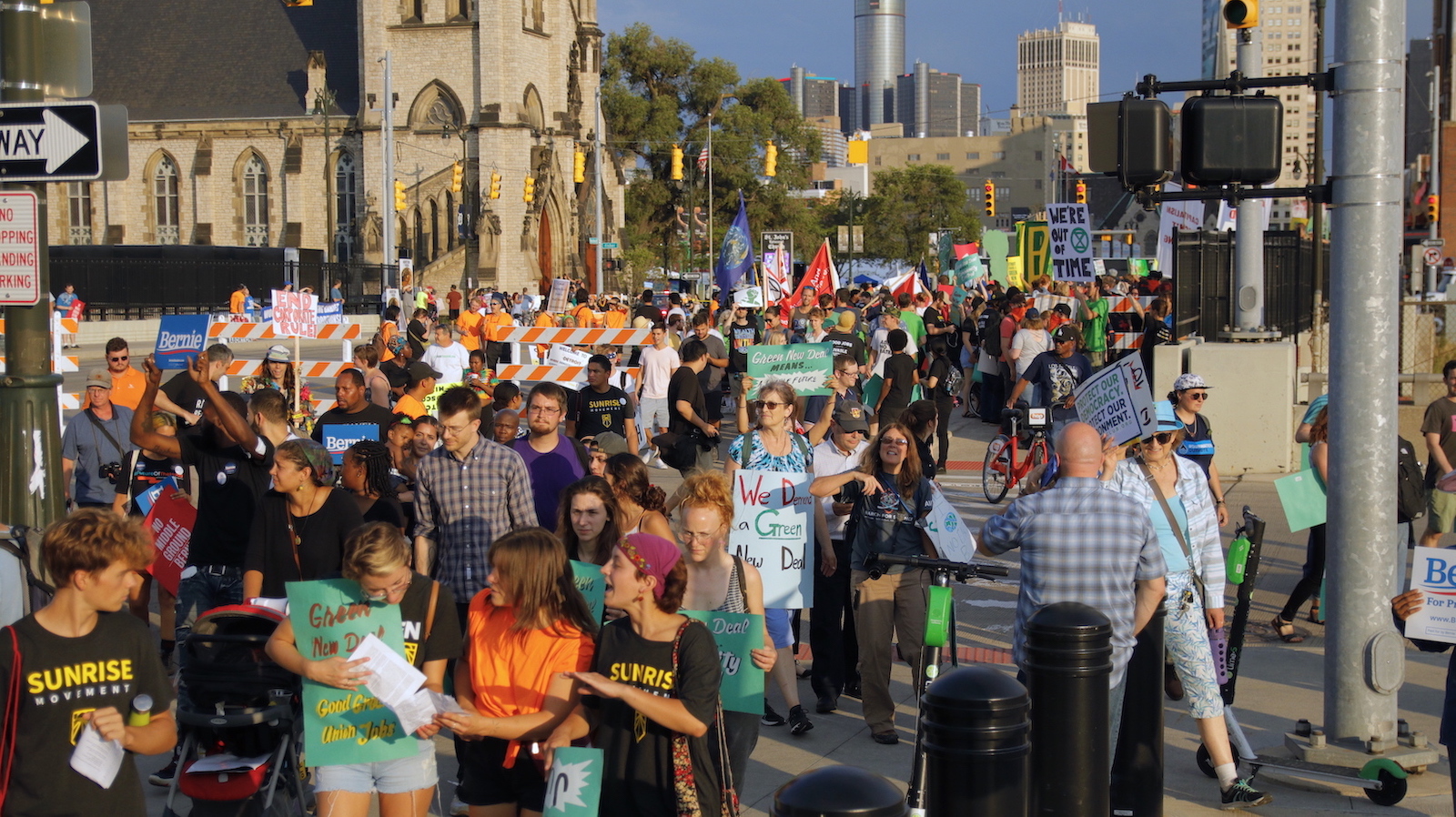 The progressive movement traversing through the blocked off Woodward past the Fox Theatre and across I-75 near Little Caesars Arena. (Photo by Michael Lucido) 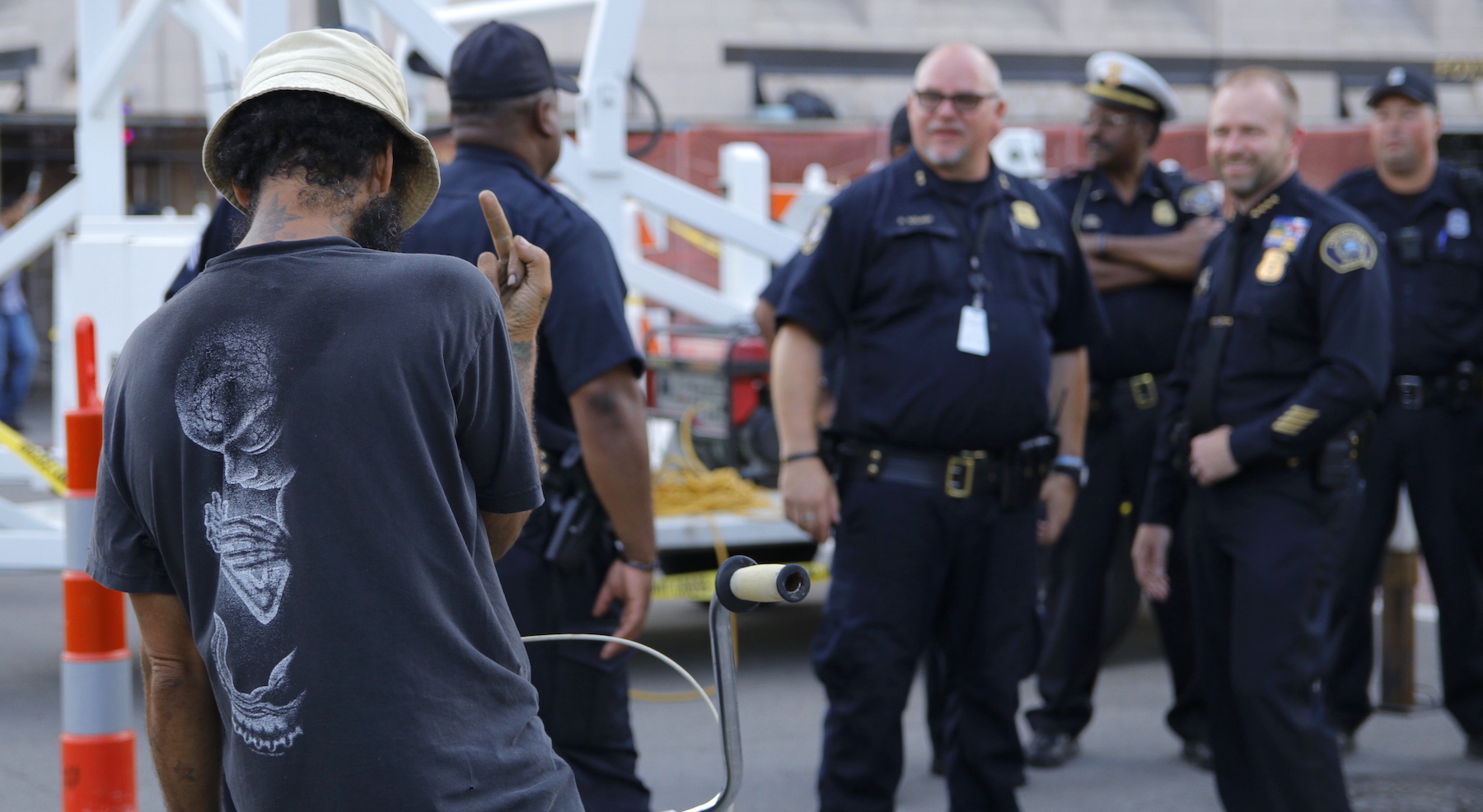 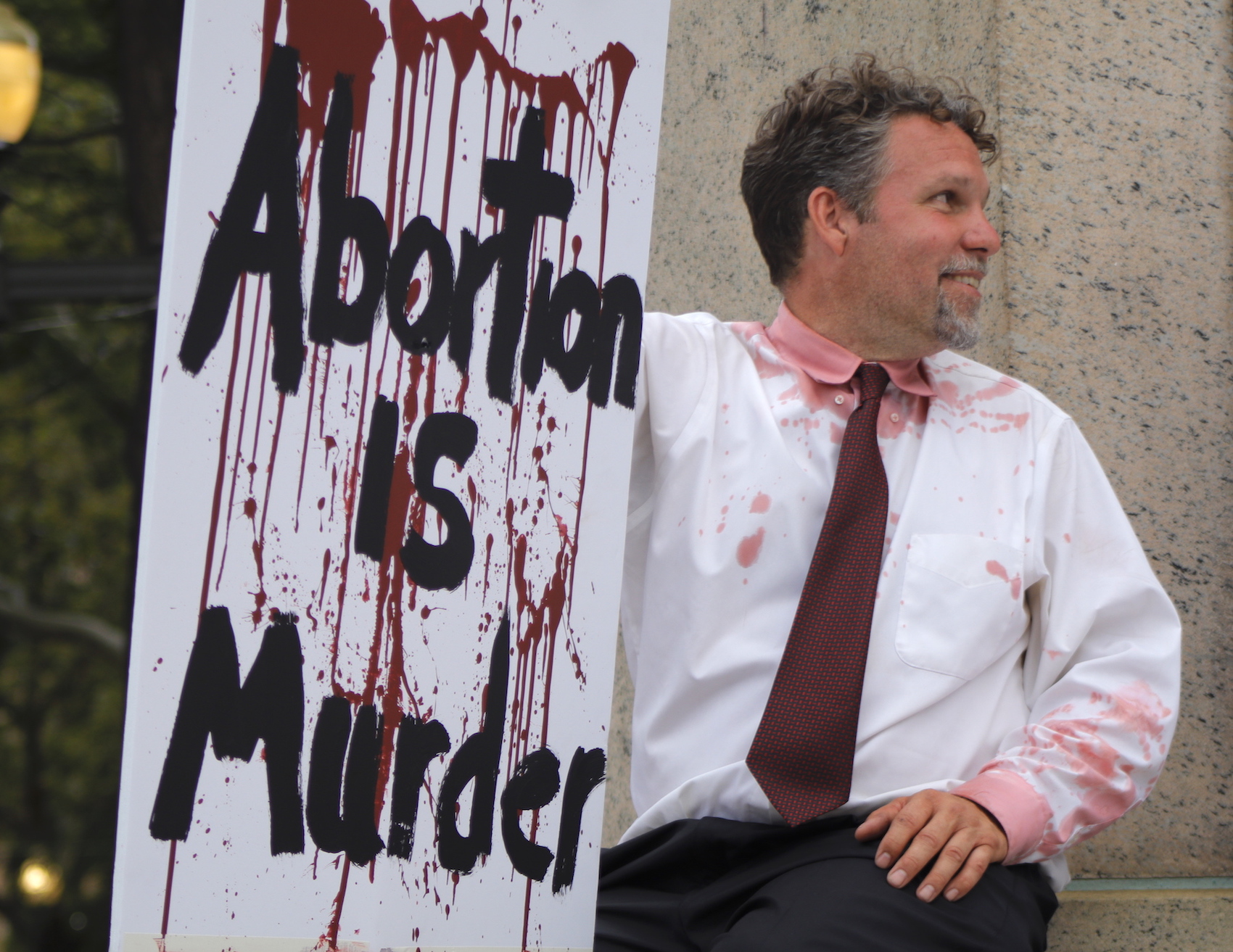 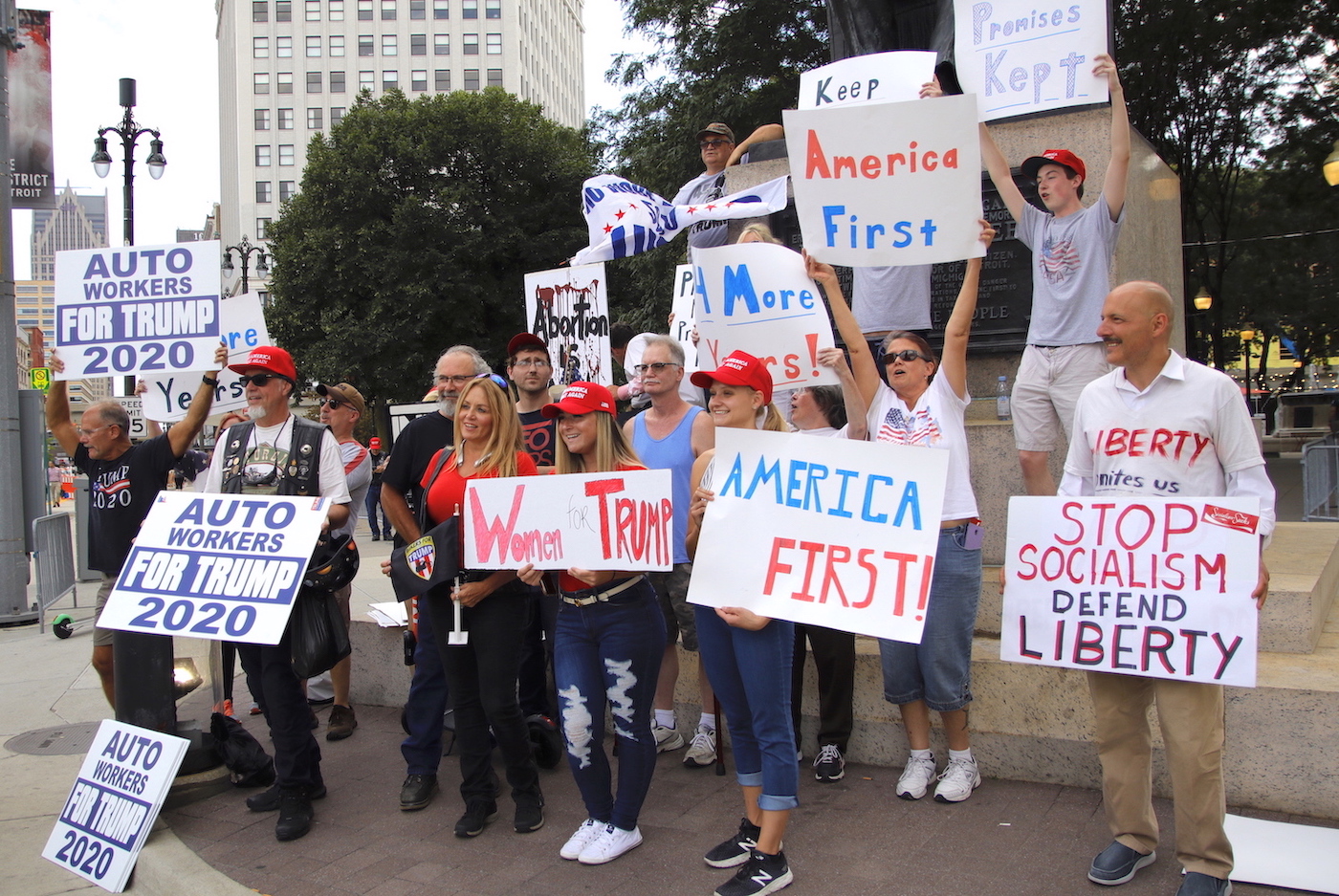 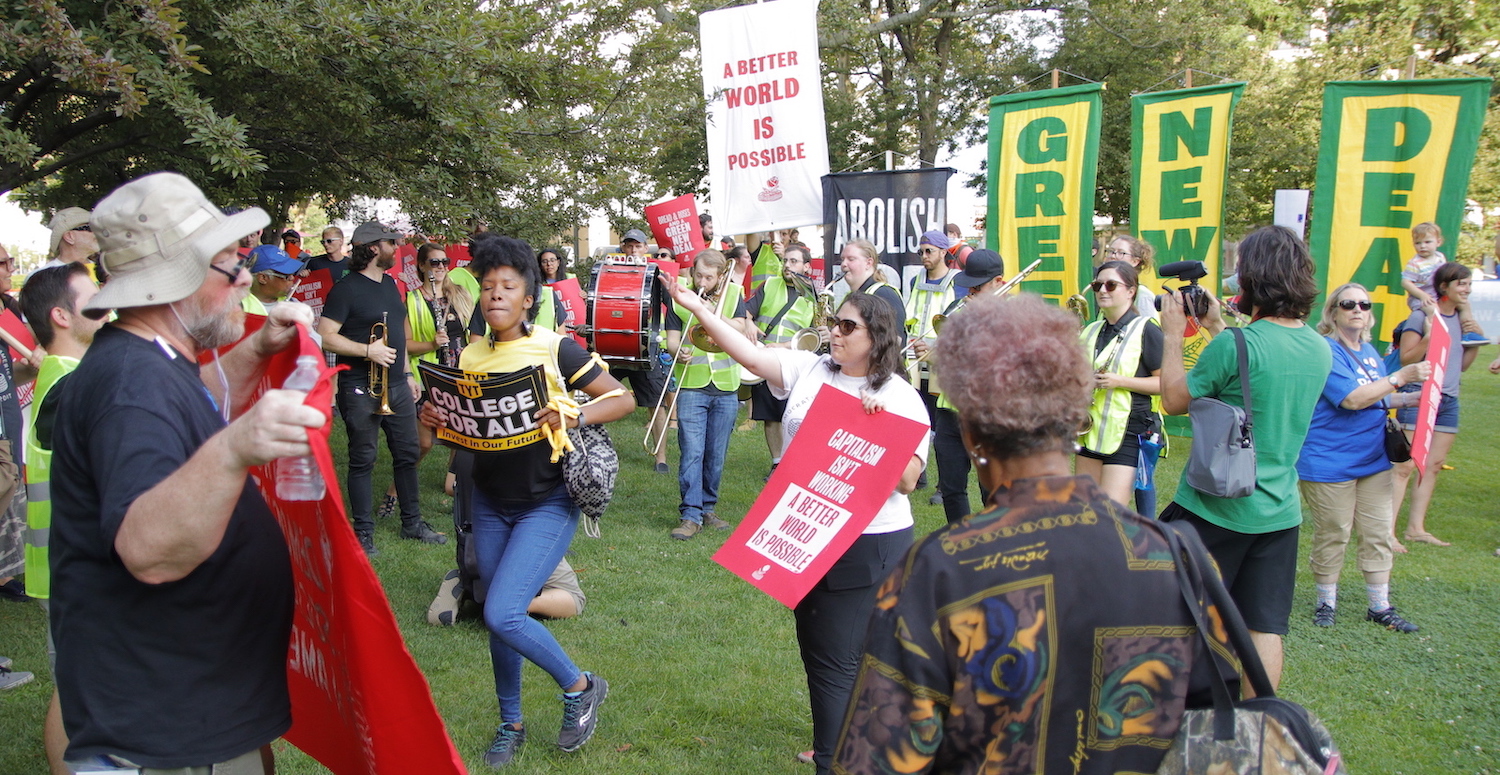 People dancing and grooving to the music while spreading peaceful messages. (Photo by Michael Lucido) 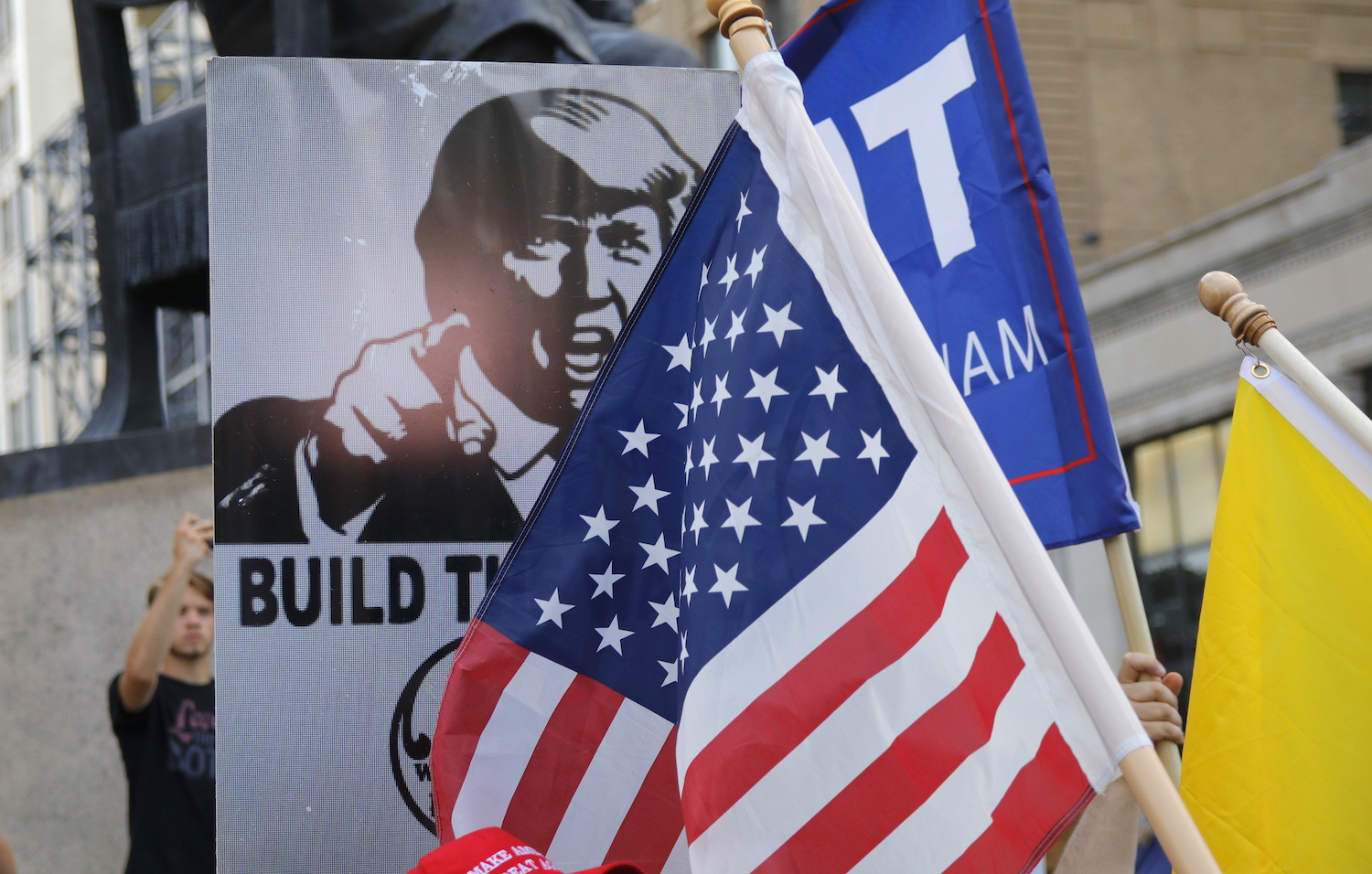