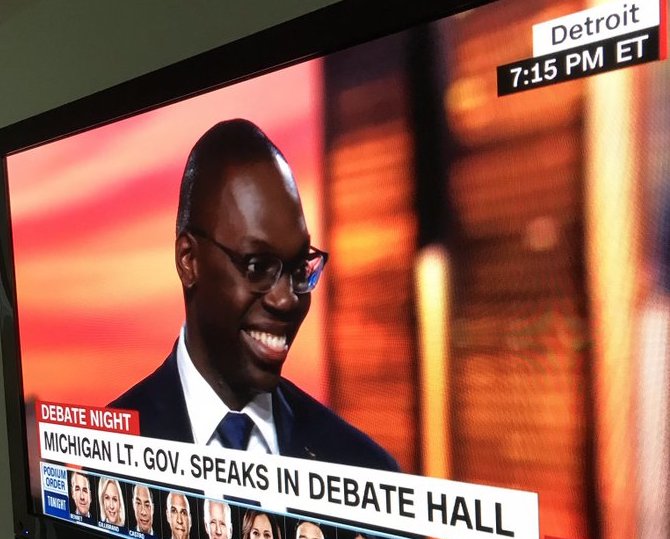 Lieutenant Governor Garlin Gilchrist was one of the highlights of the second night of Democratic presidential primary debates in Detroit.

He got a standing ovation and multiple rounds of applause Wednesday night during his Fox Theatre speech ahead of the debate that included former Vice President Joe Biden, California Sen. Kamala Harris and eight others.

Gilchrist, who grew up in Detroit, shouted out his hometown roots and noted that he's Michigan's first black lieutenant governor.

He encouraged Democrats to vote in 2020 and predicted the state would go blue, after electing Donald Trump by just less than 11,000 votes three years ago.

“The future of our society and our planet is too important for anyone to sit on the sidelines,” Gilchrist said.

He also sought to draw a line between Democrats and Republicans.

"It is impossible to be a strong advocate for public schools when you merely view education as a money-making venture," Gilchrist said. "It is impossible to protect our right to healthcare when you are suing to kick 20 million people off of their plans, including people that have pre-existing conditions."

It was much of country's first time seeing the 36-year-old, who previously worked in the administration of Detroit Mayor Mike Duggan.

Twitter users applauded Gilchrist's speech. Some were more enthusiastic about him than any of the 10 presidential primary candidates to follow.

So far, Michigan Lt. Governor Garlin Gilchrist has appealed to more voters in this country than any of the presidential candidates. He actually talked TO the people, not AT the people. #DemDebate2

Michigan Lt. Gov. Garlin Gilchrist impressed me just now in his preshow speech ahead of night 2 of the CNN Democratic Debates.

Aside from his party affiliation, I don't know his politics. But @LtGovGilchrist exuded remarkable natural charisma up there. Sky is the limit for him.

Who is @Garlin Gilchrist? Why hadn't I heard of him until now? How doesn't our nation know more about the Michigan Lt. Gov? @LtGovGilchrist's opener at the #DemDebate in Detroit was rather impressive just now. I have a feeling we will be seeing more from him in the near future…