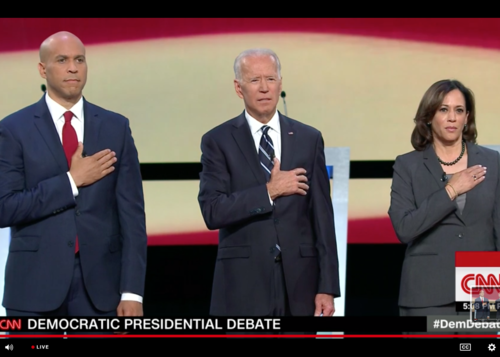 Democratic presidential candidates referenced Detroit's pollution and poor schools  during a second night of debates in the city Wednesday.

Washington Gov. Jay Inslee, whose candidacy is centered on fighting climate change, mentioned the Marathon Petroleum Refinery in Southwest as he called out environmental racism.

The zip code where the refinery sits, 48217, is the most polluted in the state.

Speaking on education, Colorado Sen. Michael Bennet said "Detroit public schools are as segregated as they were 50 years ago. Equal is not equal."

As in the first night of debates, the candidates mentioned the auto industry multiple times.

Businessman Andrew Yang talked about the automation of U.S. jobs, including those in Michigan factories.

In a curious statement on the economy, California Sen. Kamala Harris warned that "Autoworkers, perhaps hundreds of thousands, will be out of jobs by the end of the year." It appeared to be an inflated estimate of the fallout from President Donald Trump's trade war.

In his closing remarks, New Jersey Sen. Cory Booker highlighted his Detroit ties, noting his mother was born here to a UAW worker.

"First, I just want to give a lot of thanks to the city of Detroit.  They're hosting us today, and one of the reasons I respect this city is because it has the kind of defiant love that I find in many American cities, including the city of Newark.  And Detroit is turning around and Newark is turning around because we let no one divide us, no one demean or degrade us or underestimate our worth.  We pulled together and fought for common purpose and common cause.

That's the history of this city.  My mom is sitting there who was born in the city of Detroit, born to a guy  that was a UAW worker, my grandfather, who pulled his family out of poverty in the Depression.  My grandmother joined him.  She was really entrepreneurial, opened a pool hall and a laundromat right here in this city."