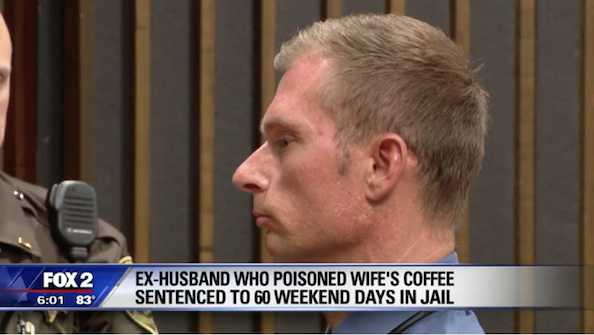 A nervous ex-wife told a Macomb County judge that she set up a video in her house and caught her former husband in 2018 dumping a blue substance in her morning coffee that ended up being an antihistamine that acts as a sleeping pill, Fox 2's Ingrid Kelley reports.

The judge responded on Thursday by sentencing ex-husand Brian Kozlowski to 60 days in jail, with the time to be served on weekends.

The sentence prompted a statement from Macomb County Prosecutor Eric Smith,m who also vowed to appeal.

"The sentence handed down by retired, visiting Judge Antonio Viviano was a slap in the face to the victim and the justice system in general. The defendant pleaded guilty to a 15 year felony in June for repeatedly poisoning his wife. The pre-sentence investigation report recommended a sentence of 38 - 180 months, yet the Judge sentenced the defendant to only 60 days, served on weekends."

The ex-wife, who did not want to be identified, said she set up a surveillance camera after getting drowsy on her way to work and trying to figure why the symptoms persisted after drinking coffee from home over several weeks, Fox 2 reports.

"This was the morning rush hour, other commuters were everywhere honking at me, either warning me that I was about to hit a wall or trying to avoid a collision with me," she said.

She also said her daughter also drugged one time.

During her victim impact statement, she said her ex-husband did other bad things during her marriage that were not caught on tape.

"He loaded me up with Adderall during summer boat trips, put laxatives in my protein powder and now poisoning my coffee," she said.

The defense attorney argued for a light sentence.