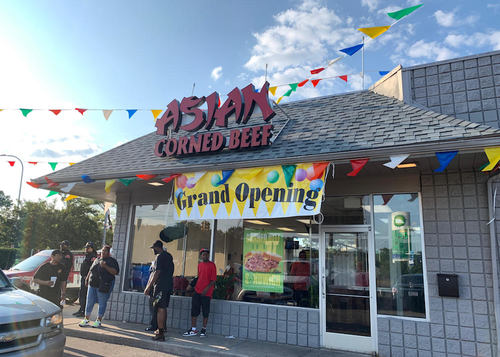 The new location debuted to much fanfare after a vocal minority thwarted the chain's plans to open nearby. (Photo: Violet Ikonomova)

Hundreds of people attended the Friday grand opening of the newest location of Detroit-based chain Asian Corned Beef, at 7 Mile and Woodward, nearly a year after a contentious battle with residents kept the restaurant from opening in its preferred location a mile away.

Cars and people filled the parking lot of the once-vacant building, and a local hip-hop station was on hand to promote. It’s the popular chain's seventh outpost in the city — and the first with a drive-through. Alongside its signature Asian-Jewish fusion egg roll, ACB debuted a fishy newcomer: the $4 lobster egg roll.

The location was initially slated to open in a vacant building on 8 Mile just west of Woodward, where it would have served as a centrally located commissary for the other sites. Though the building previously housed a Chinese restaurant, residents of the adjacent Green Acres neighborhood mobilized against the would-be fast food newcomer, preventing it from obtaining a necessary zoning variance.

One resident warned of the "litter, noise, and stench" ACB would bring. Another — a realtor — went so far as to claim the restaurant would cause residents of the affluent-for-Detroit neighborhood to “flee.”

The residents’ beef (pun intended) was cast by some as classist. ACB has relied on sexualized advertising to promote its brand, and its reputation was sullied by a much-publicized fight at one of its locations last year.

Javon Martin, the regional manager of ACB, spoke to some of those concerns at the Friday opening.

"I was surprised [by the community’s reaction]. I feel like we were labeled over one incident,” he told Deadline Detroit. “It wasn’t anything that was our fault — a customer came in belligerent, drunk.”

Still, the criticism has not fallen on deaf ears. At 7 Mile and Woodward — a busy intersection in a derelict area, Martin says the company is taking proactive steps to “alleviate any problems that people might have with us,” including regular clean up of the parking lot.

The building, previously a Tasty World and McDonald’s, was vacant for months in the run up to the Friday opening. Martin said people had begun using its grounds as a public toilet.

“You’d be surprised with what we found — defecation all around the building,” he said.

“It was terrible to clean up.”

Hours and additional information are available on the Asian Corned Beef website.