The four-story Henry Ford Pistons Performance Center is due to open in October at Third and Amsterdam streets, three blocks west of Woodward Avenue in the New Center area. In addition to the team's corporate offices and fitness facilities, it will have community access to a Henry Ford Health System sports medicine clinic, a Plum Market grocery-café with patio (photo at end), a Blink Fitness gym and at least two more retail tenants (players to be named later, let's call them). 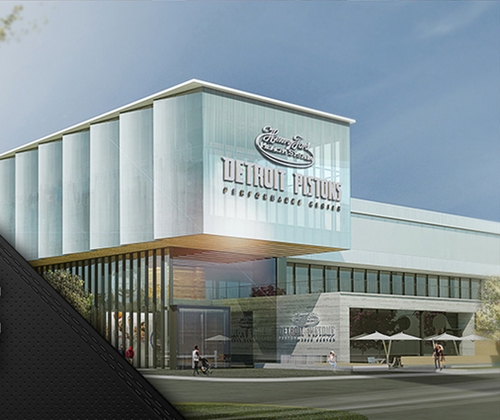 It's "the largest practice center and team headquarters in the NBA," according to a new post at NBA.com.

Its creature comforts would be mind-boggling to the Chuck Daly-era Bad Boys, who practiced at Oakland University or – when it wasn’t available – at Orchard Lake St. Mary’s Dombrowski Fieldhouse.

Players will park in covered and heated spaces. . . . "For the players, it was designed with access and ease in mind," Pistons vice chairman Arn Tellem said last week while leading a tour. "This is more than a practice facility. This is their house." . . . This is the best facility in the NBA."

Conditioning and rehabilitation equipment being installed this summer include a hot tub, cold tub, treadmill pool and sleep tank. There also will be two full basketball courts, a barber shop and players' lounge.

The second level has indoor space and a patio for Pistons events and rental by outside groups, Tellem says.

The project is designed by Rossetti, a downtown architecural firm founded in Detroit 50 years ago. Mixing retailers and a clinic with a team's private complex isn't typical, the designers say at their site:

Providing leasable space for local businesses in a professional training facility has never been done before, but makes sense for communities.

Luring retail into a neighborhood without an anchor is typically a challenge. The Henry Ford Detroit Pistons Performance Center will act as that cornerstone by . . . attracting meaningful retail, services and street life to New Center.

The Performance Center, therefore, obtains a unique identity – contemporary and distinct from the single-use sports venues of the past.

This grocery and café with outside seating will be Plum Market's second Detroit site. It opened last month at Ally Detroit Center on lower Woodward Avenue.