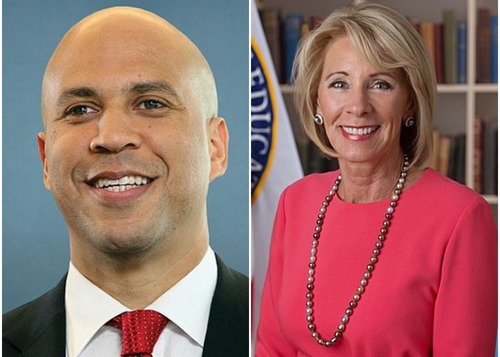 That past reportedly includes a visit to Michigan to fight for private school vouchers alongside private education proponent, Education Secretary Betsy DeVos.

Booker, a U.S. senator representing New Jersey, was a Newark councilman at the time.

In 2000, Booker was brought to Michigan to tout a ballot initiative called Proposal 1 that would have made private school vouchers a constitutional right in the state.

Why was he invited? “We wanted someone who wasn’t from the suburbs,” Dick DeVos told a reporter, as recounted by author and educator Jennifer Berkshire in this New Republic piece.

The voters crushed Proposal 1, but over 15 years, the DeVoses and their allies used the arguments Booker made — that parents should decide where public money should go, not school districts.