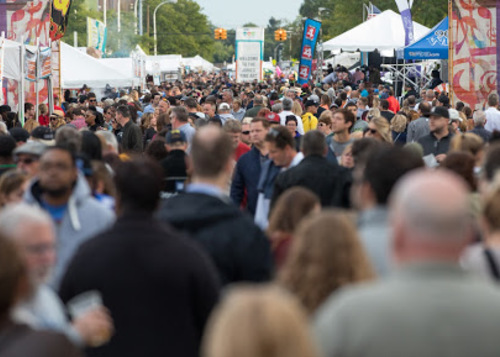 For the four days of the Labor Day weekend festival in Royal Oak, Washington Avenue — a main downtown drag — will be renamed L. Brooks Patterson Boulevard.

Patterson co-founded the festival, which debuted in 1998. He died last week at 80.

"Patterson’s support and stewardship of the family-friendly attraction celebrating quality of life in the region were unwavering," festival organizers said in a news release.

But the Tuesday announcement sparked swift outcry from critics who see Patterson as a racist whose legacy doesn't need glorifying.

Under a Free Press article posted to Twitter on the renaming, commenters wrote "ewwww," "fail," and "Racism Road?"

"ur umm WTF! Thanks for the warning, @freep to ALL Black folks and people of color to STEER CLEAR of that L. Brooks Patterson/KKK Rally dressed up as a music FESTIVAL in Oakland-TRUMP County!" said another commenter.

"I bet people aren’t happy about now living on Piece of Shit Street," said another.

In a Wednesday call, festival organizer Jonathan Witz, of Jonathan Witz & Associates, said the festival would not amend its plans in light of the negative response.

"We understand it's a fine line and we reject any level of racist rhetoric, but we still recognize someone who's done a lot for the event," said Witz, calling the street renaming a "small and fitting" tribute.

Witz said the festival has a track record of inclusivity and that it prioritizes bringing in works by artists of color. He noted that his Royal Oak production company works across 8 Mile as well, putting on events like River Days and Winter Blast.

He questioned the backlash, asking why no one had previously taken issue with Patterson's role in the festival. The Republican leader was its honorary chair person for 22 years.

"The statements have been made historically and Brooks has been affiliated with our event and now — when the man has passed — there's a question coming in about why we're recognizing someone's contribution."

For details on Patterson's racist past, check out this week's column from Deadline Detroit co-founder and longtime journalist Bill McGraw.