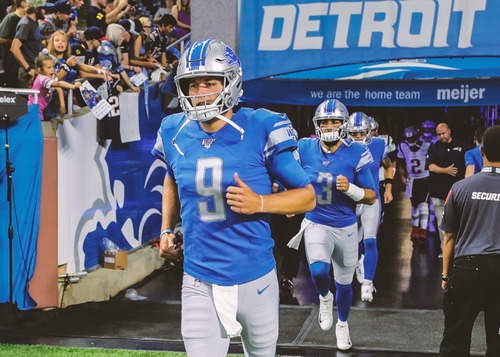 Matt Stafford runs out to the sideline at Thursday's pre-season opener against the Patriots. (Photo: Facebook, Detroit Lions)

The Lions opened their preseason with a 31-3 loss to the Patriots last night at Ford Field and caught some boos from fans along the way.

It wasn't just the score that was abysmal, writes Dave Birkett at the Free Press:

The Lions allowed nine sacks, including five on their first 13 passing plays, completed just seven passes and were booed off the field at halftime after gaining just three first downs.

The Freep's Carlos Monarrez reports on the sad vibe in the stadium:

Fans booed the Lions as they ran off ... down, 20-0. To their credit, the fans who did show up tried to get a wave started — although it came at an inappropriate time with 1:57 left in the first half and a Patriots player being examined on the field. Strangely, the fans also didn’t applaud defensive tackle Darius Kilgo as he lay on the ground for a few minutes with what appeared to be a leg injury and then walked off the field under his own power.

Three players were injured in the meaningless game.

Receiver Jermaine Kearse and defensive tackle Darius Kilgo both suffered left-leg injuries. Kearse's is more serious: ESPN is reporting his leg is broken and ankle is tweaked. Back up quarterback Tom Savage suffered an apparent concussion.

Here's what coach Matt Patricia had to say about it all: