The adult daughter of an embattled state appointee accuses The Detroit News of cultural insensitivity.

"Our choice of words can be taken out of context, especially if you lack the ability to understand and appreciate the culture and background of others," Sarah Arbulu of Grosse Pointe Farms says in a letter to the editor published Tuesday.

She responds to coverage that quotes Agustin Arbulu, director of the Department of Civil Rights, as telling an investigator his daughter "looked hot." Twenty legislative Democrats, among others, call for Arbulu's dismissal for earlier comments to a male staffer that demeaned women, including "check out her ass." 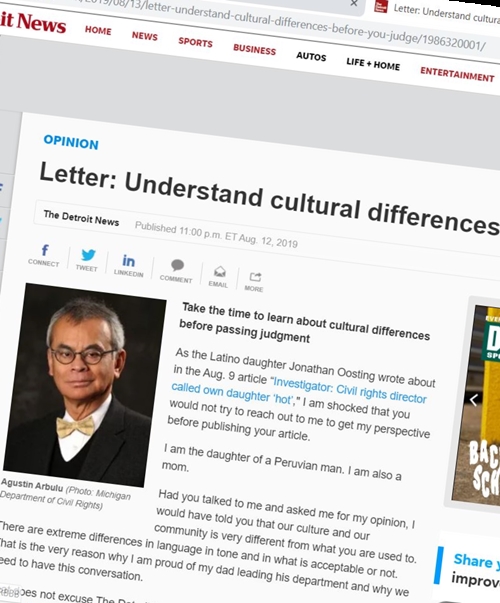 "I stand behind him," says Sarah Arbulu's letter in The Detroit News opinion section.

His family member frames the remark about her as benign rather than inappropriate. "I am the daughter of a Peruvian man," the 47-year-old paralegal writes in her six-paragraph letter.

Our culture and our community is very different from what you are used to. There are extreme differences in language in tone and in what is acceptable or not. . . .

My father’s actions do speak louder than words. . . . My dad is fighting for your civil rights and for mine, throughout the state of Michigan. I am standing by my dad. . . .

To an average person without a rich cultural identity, my father's words may have sounded inappropriate, but you must understand our various cultural idiosyncrasies. It is upon us all to better understand our cultural differences.

Augustin Arbulu, who has led his department since 2015 after being appointed by past Gov. John Engler to the state Civil Rights Commission. That body reprimanded him two weeks ago for May remarks to a male aide outside a community forum in Grosse Pointe Park.

Communications analyst Todd Heywood reported that Arbulu said "would you look at that woman" and "check out her ass" in reference to a resident. When Heywood confronted him, Arbulu allegedly brought up Heywood’s sexual orientation.

The 69-year-old director earned $159,800 last year. Gov. Gretchen Whitmer asked the commission why he wasn't dismissed. (She lacks authority to do so.)

'Check Out Her Ass' Is What Got Civil Rights Agency Head Reprimanded, Aug. 9