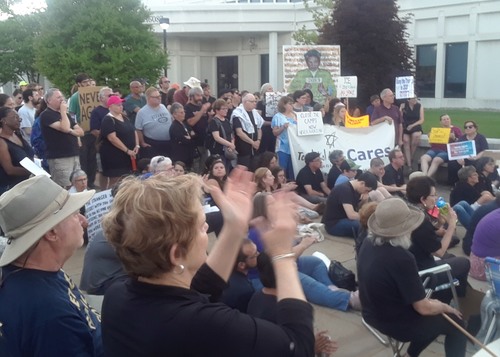 Protesters gathered outside the Dearborn Police Department Tuesday to call for an end to its partnership with Immigration and Customs Enforcement, which includes holding detainees for the controversial agency.

The department last year detained nearly 1,000 immigrants on behalf of ICE, according to The Detroit News.

The full scope of the cooperation agreement between the two agencies is unknown. It's also unclear where they're held. Dearborn Police Chief Ron Haddad and Dearborn Mayor Jack O'Reilly Jr. have refused to provide specifics to media.

The rally — part of the national Close the Camps campaign — included speeches from U.S. Reps. Rashida Tlaib, Andy Levin and Debbie Dingell, who represents the district.

Other Michigan law enforcement agencies have limited their cooperation with ICE, The News notes:

In January, Kent County Sheriff’s Office changed their policy on holding detainees for ICE following the arrest and three-day detention of Jilmar Ramos-Gomez, a decorated Marine who was born in Grand Rapids.