Some people love the Dream Cruise, some people hate it, and some people are agnostic, but always ask what the Magic Bag marquee sign said this year, because that's the funniest part. (Personal fave: Woodward Dream Cruise: Giving Downriver parents an excuse to visit their gay children for 15 years) 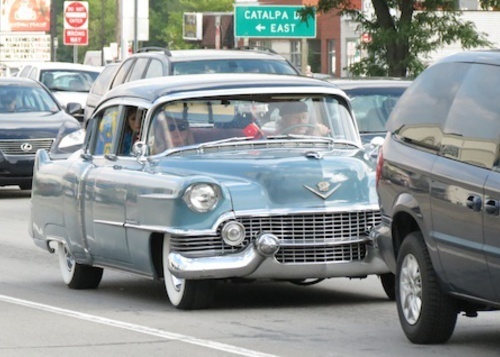 Ain't she a honey?

And some people used to love it but have wearied of the now-week-long spell of congestion and related headaches.

The Detroit News checks in with Duggan's Irish Pub:

"Everybody is trying to sell something now. That's the worst thing I think," Duggan's general manager Larry Payne said. "So many T-shirt vendors, people selling license plate signs, anything to do with (the Dream Cruise). It seems like it's every five feet down Woodward."

Located right off Woodward, the two-story Kelly-green pub has been a gathering spot for cruisers to show off their rides since the event's inception 25 years ago. But the cruise has changed since the first one in 1995, Payne said.

"Back when this started, it was just a cruise. Nobody was really trying to profit on anything," Payne said. "Obviously, we here at Duggan's get busier because the crowds and we're selling our drinks and food, but other than that we don't get into selling anything outside for the profit."

Make no mistake -- Duggan's does a lot of business during the cruise, packing to capacity every night. But Affordable Flowers, in Birmingham, will close early on Friday and all day Saturday. It's too hard to get in and out.

For many Woodward businesses, Cruise week is Christmas on steroids -- lots of customers, but in such a tight time frame, and with so much traffic to endure, that it's a decidedly mixed blessing.

One Ferndale resident and Cruiser said it's less fun than it used to be, and he may not bring his 1950 Cadillac to Duggan's lot this week. Too much hassle.