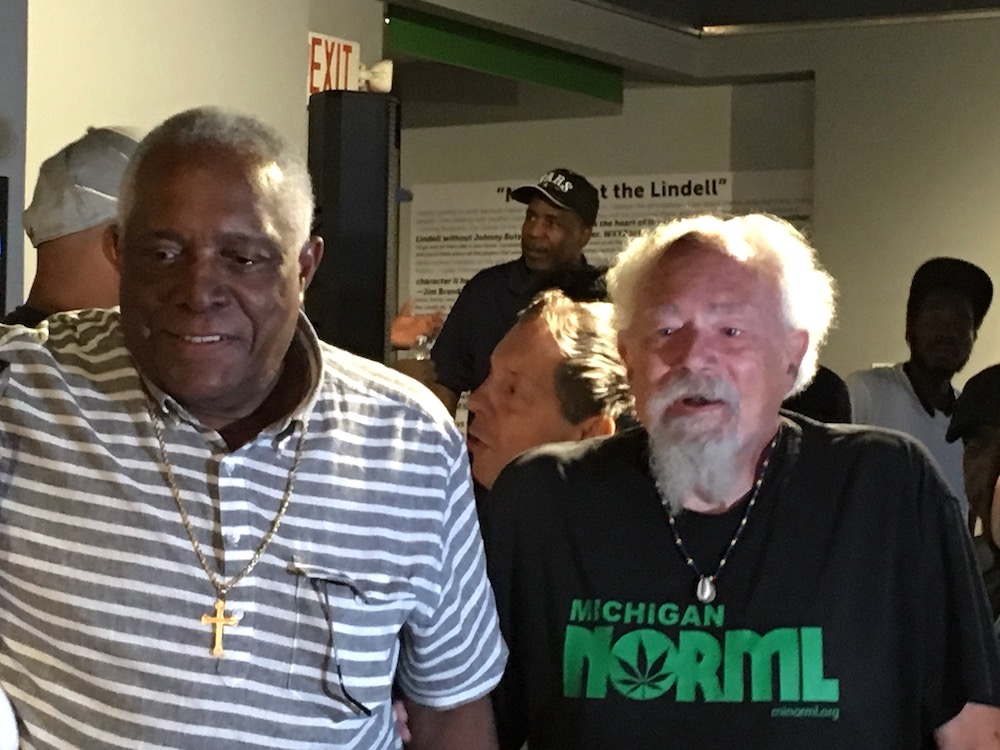 Observing the white-haired Ron LeFlore at the Detroit Historical Museum Sunday was the white-bearded John Sinclair. Both were history-makers of Motor City lore from the second half of the 20th Century, and their paths crossed long ago.

The 71-year-old LeFlore walked in on a prosthetic right leg, the result of vascular disease. The 77-year-old Sinclair moved purposefully with a walker, having lost a toe to diabetes.

After they shook hands and posed for pictures, Sinclair recalled how they first met, in the early 1970s, when both served time in Jackson Prison, a Michigan state penitentiary. He told of how a mutual friend brought them together for lunch in 1975 after both were out of the joint.

“He said `You know me, I’m Ronnie,’” Sinclair said. “I used to bring your food in Five Block.”

Five Block was for special prisoners and Sinclair got there by being Michigan’s Marijuana Martyr. He was serving up to 10 years for giving two marijuana cigarettes to an undercover Detroit police officer. LeFlore worked in the prison kitchen while serving up to 15 years for the armed robbery of an East Side bar.

(Marijuana is now legal in MIchigan; holding up bars is still a crime). 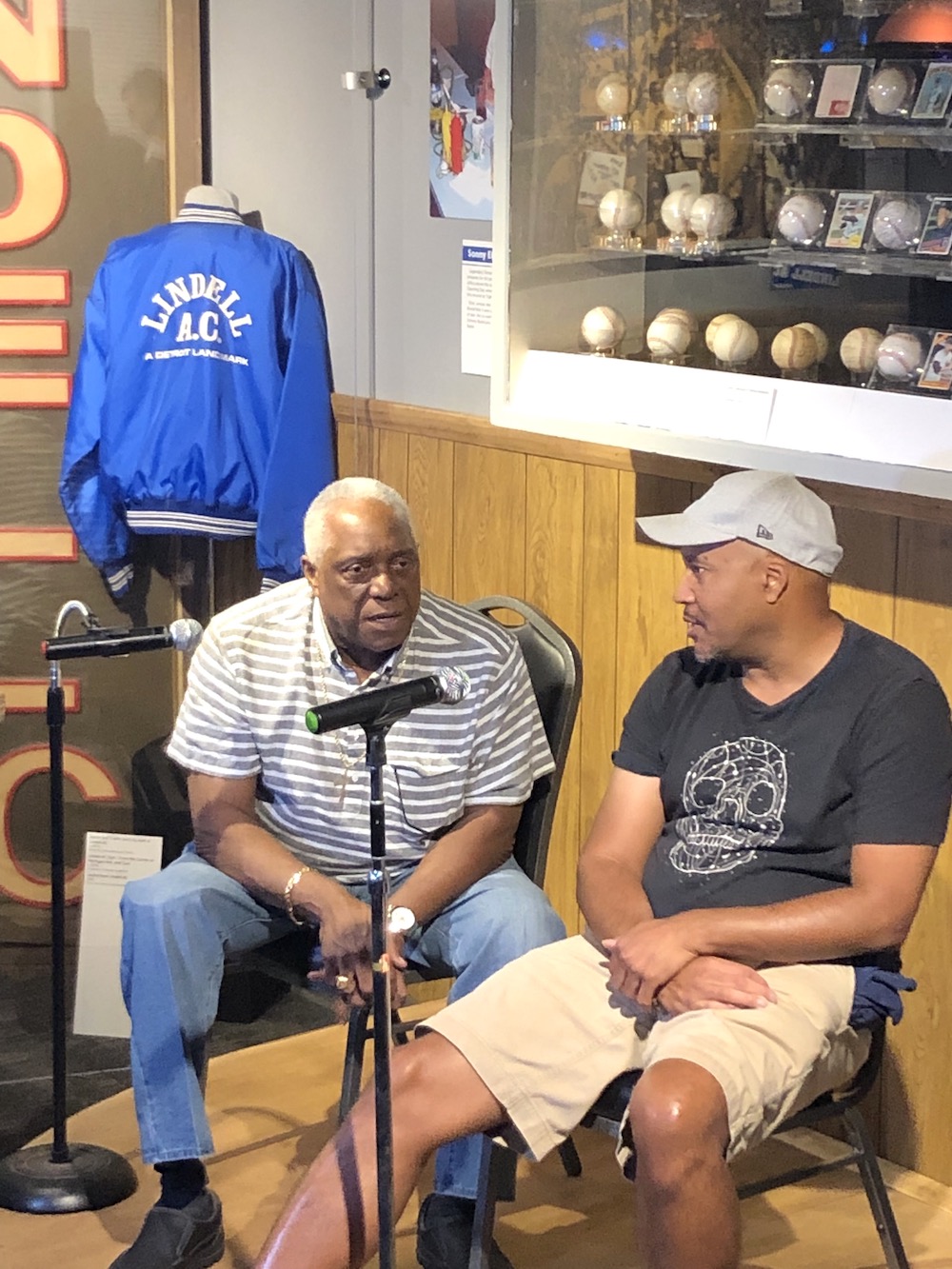 “I was a political prisoner,” Sinclair said. “Ron was just an inmate.”

'One In a Million'

LeFlore, Sinclair and several hundred enthusiastic Tigers fans gathered in the museum’s auditorium Sunday afternoon for a free revival screening of “One in a Million,” a 1978 a CBS-TV movie starring LeVar Burton.

It dramatizes LeFlore’s unlikely rise from prison in 1970 to center field for the Tigers in 1974 and to the American League All-Star team in 1976.

Sunday’s standing-room-only  audience seemed to enjoy the characters  but the big burst of applause came for a mere establishing shot – from the corner of Michigan and Trumbull, looking at Tiger Stadium, the home of the Tigers until 1999 and formally torn down 10 years ago.

Much of the film’s charm comes from such scenes that make it an unintentional period piece, especially for Detroiters. Interior shots of the stadium show the mid-‘70s renovation in progress, a transition from old, green wooden seats (still in the upper deck)  to the newer, blue, plastic chairs (then only in the lower deck).

In addition, there are evocative looks at Chicago’s Comiskey Park and Milwaukee’s County Stadium, both since demolished. Around the Tiger Stadium batting cage are real Detroit stars from the era like catcher Bill Freehan, first baseman Norm Cash, right-fielder Al Kaline and manager Billy Martin.

There are plenty of wide collars and lapels from the Super Fly era. You see and hear telephones with rotary dials that go click-click-click and people smoking cigarettes just about anywhere. You see giant sedans of the era that were called “land yachts.” 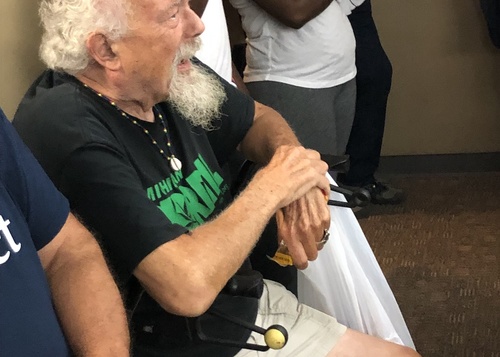 John Sinclair watches from the back of the auditorium.

After the screening of that ‘70s show, the audience moved over to the next room where the museum has fashioned a reasonable facsimile of the Lindell A.C., a famous sports bar that used to stand at Michigan and Cass and was at its peak in the 1970s.

It was run by Jim Butsicaris who tipped off Martin and the Tigers to this raw, natural athlete just learning baseball in the prison. Butsicaris plays himself for a bit part in the film (and rather well). Memorabilia that decorated his Lindell walls now hangs in this museum display, on view through September.

One of the display cases showed LeFlore’s Detroit jersey, baseball bat and other equipment. TV screens showed images of Mark (The Bird) Fidrych and boxer Thomas Hearns, other ‘70s heroes. Amid all this sat LeFlore, a man never at a loss for words or short of opinions.

Somebody asked him about how he learned to play baseball later than most major leaguers and compared it to Michael Jordan retiring briefly from basketball to play minor-league baseball at the peak of his career. 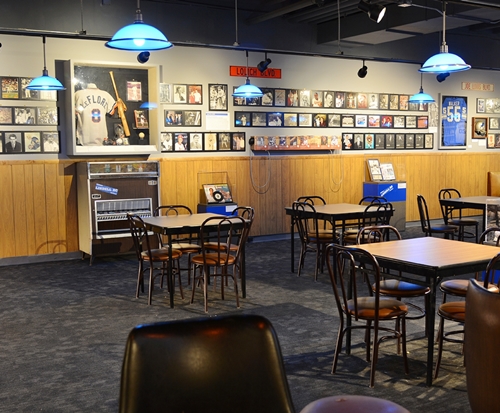 “He was going to be fined or suspended for gambling debts he owed to some not-nice people,” LeFlore said. “I think they killed his father.”

LeFlore spoke of making the majors and turning down an old friend who asked him for money for heroin. That same night, LeFlore said, his friend died in a jewelry store robbery.

LeFlore also told lighter tales, too, like the one about his minor-league bus in Iowa that almost got hit by a train. And he mentioned how he and Tigers teammates Gates Brown and Willie Horton got robbed at gunpoint by two guys outside the team hotel in New York.

Sinclair, on his way out, recalled how “we didn’t have too much time back in the hippie days” for bourgeois pursuits like baseball. But LeFlore’s presence turned Sinclair back onto the patriotic national pastime.

During LeFlore’s Tiger years and after, Sinclair often sat in the Tiger Stadium bleachers, in centerfield, where LeFlore played. Sinclair still follows the locals closely, although they are the worst team in Major League Baseball.

“But I’ve only been to three games this year,” Sinclair said. “Hard to get around. I’m getting old.”