Detroit water shutoffs are down, but is the crisis worsening? 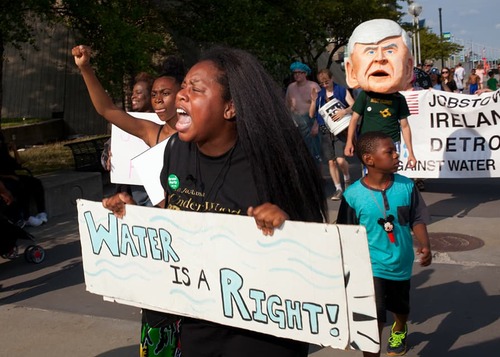 The majority of households that saw their water shut off in April are months later still without service. (Photo: Facebook, Hydrate Detroit)

First, the good news: In April, the Detroit Water and Sewerage Department said anticipated shutoffs were down nearly 70 percent from recent years, with under 6,000 customers behind on their bills.

Now the bad, brought to us by a new report from Bridge Magazine: The percentage of customers who apparently can't afford to have their service restored is way up — meaning more Detroiters may in fact be living without water, a basic necessity, for a longer period.

City of Detroit records obtained by Bridge Magazine show that 7,310 of 11,801 homes disconnected for nonpayment since April remained without water as of Aug. 1. Of those homes, a vast majority, 5,354, are believed to be occupied.

That’s up significantly from last fall, when 71 percent of disconnected homes had been restored over roughly the same period. And the numbers would appear to contradict long-standing assurances from Detroit leaders that service is back on for the overwhelming majority of residents within 48 hours after disconnections for nonpayment.

Indeed, city officials have long cast the water shutoffs as mere service "interruptions," claiming the vast majority of people quickly have their service restored. In 2017, The Detroit News reported that DWSD director Gary Brown said 90 percent of disconnected customers would be restored within 24 hours. But the next year, DWSD dodged a Free Press inquiry about the exact number of people affected by longterm shutoffs.

According to Bridge, DWSD only recently began keeping public records on service restorations.

A spokesman for the agency tells Bridge that Brown wasn't lying. When he offered timelines, they say, he was talking about how long it takes residents to enter into payment plans, rather than the length of time their water is cut off.