Kevin Gray of Detroit went by Sammie Gray during two years in Michigan custody as inmate 383124, convicted of home invasion.

Paul Egan recounts the wacky trickery in the Free Press:

Somehow, the 37-year-old Detroit man went through the Wayne County court system and was convicted under his brother’s name. . . .

The deception was not discovered until June 4, just as Gray was about to be released on parole from Parnall Correctional Facility near Jackson.

"This parolee was not willing/able to correctly ID himself as he came through the gate," an alert prison official wrote that day in an urgent memo. . . "He seemed not to know his date of birth, his soc # or any of the other identifiers commonly used," and we "are not comfortable with allowing him to leave," the officer wrote. . . .

It was back to his cell for Gray, who is now expected to be paroled this week, department spokesman Chris Gautz told the Free Press. 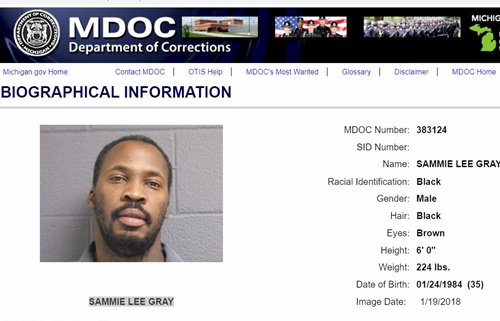 A fingerprint check should have revealed the ruse, Egan notes. Another lapse occurred at the county level:

The Wayne County Prosecutor's Office knew Gray's true identify, as well as his aliases, spokeswoman Maria Miller said. But she could not explain why Kevin Gray's conviction was registered under the name and date of birth of his brother.

Gray may have posed as his late brother in a bid for leniency, suggests Gautz of the Michigan Department of Corrections.

Sammie Lee Gray had a much less extensive criminal history than Kevin Gray, records show. Sammie Gray had never been to prison, but was sentenced to six months in the county jail in 2002 for attempted possession of marijuana, records show.

Kevin Gray . . . had been to prison twice before. He was locked up for felony firearms offenses in 2007 and crimes related to drugs and stolen property in 2004.