In a vigorous call to action, The Detroit News' editorial page editor urges Detroit leaders and residents to think "about the terror and pain young Emma Hernandez endured in the final moments of her life" after three pit bulls attacked the 9-year-old bicyclist Monday night in Southwest Detroit. 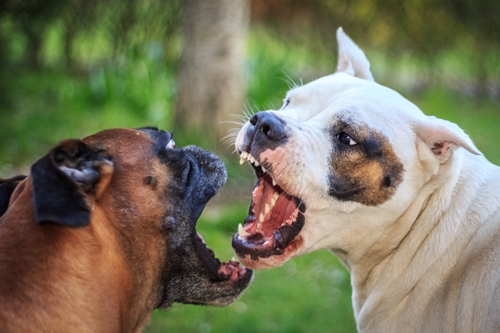 "Owners must be held to account" for unlicensed and dangerous dogs, The Detroit News columnist writes.
(File image: DepositPhotos)

"The entire community should be in tears," Nolan Finley writes in a column Tuesday afternoon.

And it should be acting. We should never think it's normal that children are stalked and killed by wild animals on the streets of an American city, in the streets of our city.

This is disgraceful, and unacceptable. Emma's death warrants much more shock and outrage than it's receiving.

If we can shrug and go on this time, if her death becomes a one-day story, if nothing is done to make sure our children are safe from killer dogs, then we can't call ourselves a civilized city.

This week's death, Finley notes, comes three years after a four pit bulls killed a 4-year-old boy who "was pulled away from his mother while they were walking on Bayliss Street in Detroit."

The columnist calls for "an enforcement effort that is backed by stiff penalties with the goal of registering every dog. Owners must be held to account." He adds that students walking to schools, which reopen Sept. 3, "should not have to walk in fear of being chased down and killed by dogs."