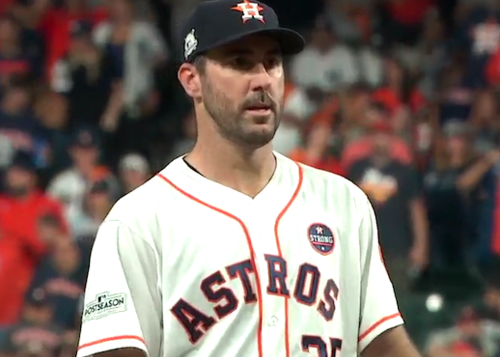 In a story bylined by Chris Thomas, the Freep's sports editor, the paper reports:

The Astros blocked the Free Press at Verlander’s request, according to Gene Dias, Astros vice president of communications, who told the Free Press reporter assigned to cover the game that Verlander was “adamant” in saying he would not speak to any credentialed media if the reporter was part of the postgame media scrum.

No explanation was given for Verlander's hard feelings about Anthony Fenech, the Tigers' beat reporter assigned to the game.

In a series of tweets late this morning, Verlander gave his reasons for the refusal:

I declined to speak with the @freep rep last night because of his unethical behavior in the past. I reached out to the @freep multiple times before the game to notify them why and to give them an opportunity to have someone else there. Ironically they didn’t answer.

Although I tried to avoid this situation altogether, I’ve still reached out to @freep multiple times today with no response. They’re still not interested in my side of the story.

Fenech was eventually allowed into the clubhouse, after Verlander was done speaking to other media. And this ensued:

Once inside, the reporter approached Verlander, who said: “I’m not answering your questions.” When asked to comment on Wednesday’s loss, Verlander walked away.

The snub apparently runs contrary to rules set by the Baseball Writers' Association of America and MLB's union agreement with its players. Thomas writes:

Preventing media access runs countercurrent to the mission of the BBWAA, which was established in 1908 to “ensure proper working conditions in press boxes and clubhouses, and to ensure its members have access to players and others in the game so members’ reporting can be accurate, fair and complete.”

In addition, preventing a reporter from entering the clubhouse on time could violate Section 2 of the Regular Season Club/Media Relations Guidelines in the collective bargaining agreement, which gives working media access to both clubhouses “no later than 10 minutes following the final out of each game.” In Wednesday's case, the Free Press was admitted 19 minutes after the game ended and six minutes later than other credentialed media.

Thomas did not address Verlander's claims in an updated story Thursday, which focused on the pitcher's violation of the MLB rules about media relations.