If you've been wondering why Mitch Albom has been so scarce in the Free Press of late, barely rousing himself to riff a few hundred words on giving up coffee or the anguish of back-to-school shopping, one obvious clue dropped today. 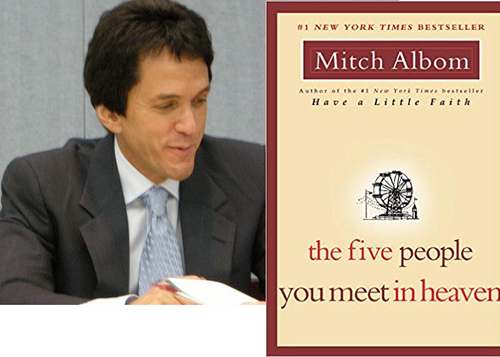 Albom's "The Five People You Meet in Heaven" was poorly reviewed, but sold well.

Mitch Albom’s bestselling novel “The Five People You Meet in Heaven” is getting the TV series treatment.

Fox has issued a script-to-series development order for the project, with Albom himself in place to write and executive produce. The one-hour drama project hails from Warner Bros. Television and Fox Entertainment.

Using familiar characters from the novel, the series will explore each character’s unique journey in this world and the next. With heaven as the place where your life is finally explained to you, by five people you touched, the storylines of interwoven characters will explore larger themes such as redemption, love, hope and human connection.

The co-executive producer is Keith Eisner, whose credits include "The Good Wife" and "Designated Survivor."

Weepy stories about redemption, love, hope and human connection seem to be a trend of late, if shows like "This Is Us" are any indication.

The novel, released in 2004, was at the center of a minor media story when Carole Leigh Hutton, then-editor in chief, spiked a freelancer's negative review of the book assigned by the book editor. The review ran later in a Florida newspaper. Albom's books sell well, but are rarely more than politely reviewed. This critic was particularly mocking.

Now watch to see what happens to Albom's presence in Detroit media. This may be his big exit.